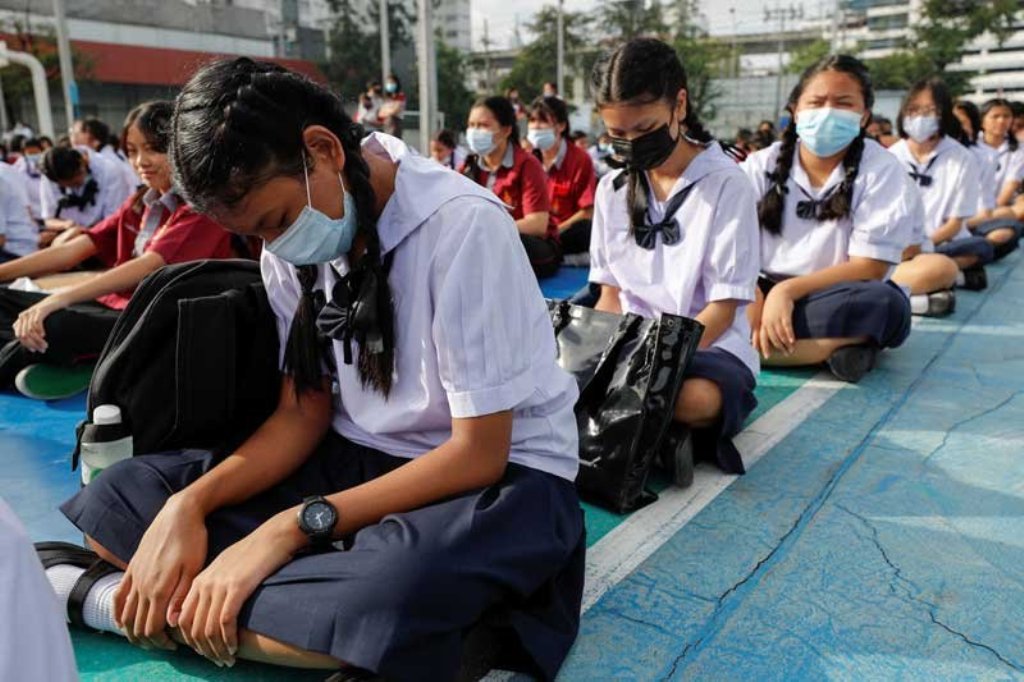 When Mob Fest kicked off in Bangkok, many of those participating were school children who refuse to shy away from hot political and social issues. Despite their tender age, teenagers are boldly standing up for the causes they believe in – democracy, freedom of expression, and the right to help shape the future of their own country.

Their campaign is being compared to the historic uprising by youngsters on October 14, 1973 and is receiving growing public attention.

Organizers of Mob Fest include the SaraFreeThought Group, students from Sarawittaya School, the Triam Protest Group from Triam Udom Suksa School, and Bad Student, a group of schoolkids who sarcastically describe themselves as the flawed output of Thailand’s “so-good education” system. The event is also backed by students from a slew of other schools.

“We are throwing our support behind @MobFest_th because we want an end to dictatorship, a new Constitution, and the restoration of strong social democracy,” the Triam Protest Group declared.

Its message resonates with a wide base of school students, offering them hope that the movement may one day achieve its goals.

Triam Udom Suksa, one of the country’s most prestigious schools, is often seen as an ivory tower for privileged children from wealthy families. Given their background, it seems odd that they would notice, let alone question, what has gone wrong in society.

But the emergence of the Triam Udom Group has changed public perceptions about the school and its students.

“We are usually told to obey school rules,” one of the group’s leaders said. “We are asked why we enrolled in school in the first place if we are not going to follow its rules. But rules are made by people. When people and society changes, outdated [rules] should be amended.”

The Triam Protest Group has questioned not only the school’s rules on hairstyles, but also the Thai education system’s culture of SOTUS – Seniority, Order, Tradition, Unity and Spirit. In response, it has attracted more than 21,000 followers on Facebook alone.

The group initially waded into national politics when it protested the disappearance of Thai pro-democracy activist Wanchalerm Satsaksit in Phnom Penh earlier this year. It has now joined calls for Prime Minister Prayut Chan-o-cha to quit, the Constitution to be rewritten, and the monarchy reformed.

Founded in May, Bad Student has quickly earned a reputation among the new generation. It first grabbed the public limelight in July by staging a thought-provoking protest over student hairstyle rules, with a pupil in school uniform sitting tied up and muzzled on the pavement.

“This student has violated school rules with hair that reaches below her earlobes and has destroyed Thai students’ identity by wearing bangs. PLEASE PUNISH HER,” read a sign beside her. Written in small print were the words: “Stop imposing forced haircuts.”

The symbolic protest lasted barely an hour but caught the attention of the entire country, inspiring a multitude of students to challenge rules and triggering a positive response from education authorities. The Education Ministry is now in the process of preparing a new regulation on student hairstyles and uniforms.

The group – which is scheduled to hold a big rally on November 21 – has vowed to join Mob Fest, but not before making a point of its own. Bad Student has asked supporters to gather in front of the Education Ministry at 1pm, after which it will march to Democracy Monument for the start of Mob Fest at 2pm.

“Let’s make this march the biggest demonstration of school students ever,” it declared on Twitter, where Bad Student has about 125,000 followers.

Launched just a few days ago on November 7 at Sanam Luang, Free Student may be a new arrival on the protest scene, but it has big ambitions. Its stated aims are to connect and strengthen the youth movement, provide it with safety and security, and create a synergy between activists.

“Having long been suppressed by schools, parents and society, students are still relatively weak. We are still seen as little kids. So, we created Free Student to foster students’ strengths,” said Supicha Chailorm, a prominent member of the group.

This eloquent schoolgirl explained that Free Student was not established to seek publicity or fame, but to develop networks that will invigorate new-generation movements.

“We are the new wave and we will work together with groups who share the same ideology,” she said.

On November 8, Free Student released a statement addressing the King and pressing him for actions it believes will lead to a better Thailand.

Young students from every corner of Thailand have been united by a keen interest in the causes young demonstrators are fighting for. At schools across the land, students have created social-media pages to push for the same causes.

Flash mobs have been reported at schools in Bangkok, Nonthaburi, Songkhla and elsewhere.

Elsewhere, the SaraFreeThought Group describes itself as a sanctuary for students at the oppressive Sarawittaya School. SaraFreeThought won its original campaign against the school’s tough hairstyle rules. Now, it has jumped on the youth movement bandwagon and, along with many of its peers, will join today’s Mob Fest.