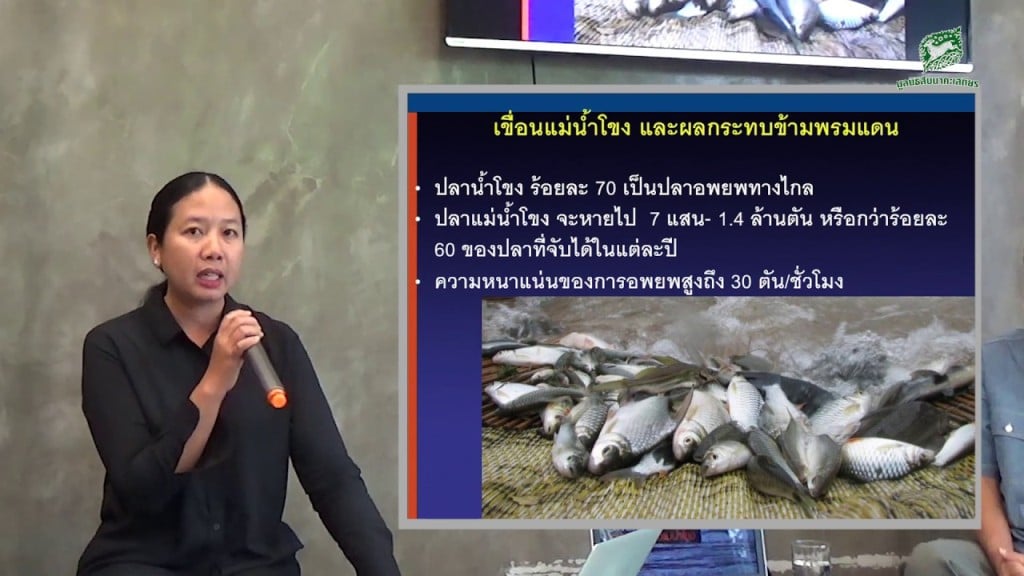 Activist Pianporn “Pai” Deetes’ fight against China’s damming policies along the lower stretches of the Mekong River by the Chinese government is a David-versus-Goliath story.

For almost two decades she dedicated herself to stop a project that she believed would lead to massive damage to the river if it was allowed to continue. The Thai cabinet early this year cancelled the Lancang-Mekong navigation channel improvement project proposed by China, in no small part thanks to publicity drummed up by Ms Pianporn and her team.

As the Campaigns and Communications Director for International Rivers’ Southeast Asia programme, Ms Pianporn’s most urgent task is protecting mainland Southeast Asia’s major rivers, including the Mekong and Salween, as well as the rights of local communities living long their courses. And in recent years, her focus has turned to Thailand’s role as a dam developer and financier.

The Chiang Mai University graduate told the Bangkok Post that she aspires to create equality and fairness in society, to help marginalized communities live with honour and dignity, and protect the environment for the benefit of future generations. “Our focus is to provide local communities and the [wider] public with the latest updates on dam projects in China and Laos. For instance, if a Thai company begins a dam project in Laos, we will be watching to see if it has carried out an Environmental Impact Assessment [EIA],” she said. “We also teach local communities on how to handle the impact of upstream dams.”

Developers, she said, must communicate all available data to affected communities. She said proper communication is crucial to improving transparency, which is important considering the impact the projects have on the environment and local communities downstream.

Ms Pianporn engages a wide range of stakeholders including local and/or ethnic communities, civil rights organisations, legal experts, academics and the press, to highlight the growing pressure on the Mekong and Salween rivers.

When Ms Pianporn began working as a social activist, there were only two dams blocking the Mekong in China. Now, there are 11 dams along the upper reaches of the river, known as the Lancang Dam Cascade. “I still remember when I first worked on the Mekong dam problem, most villagers along the river were not aware of what the dams could do to the environment. Riverbanks were collapsing, tide times were changing,” she said.

“We used data to explain the effects of the dams, and sometimes we would take them to see what was happening with their own eyes. Now they are more empowered — they can file a petition with the Administrative Court by themselves. They can even confront the Chinese and Thai governments about the problem,” she told the Bangkok Post. Due to the rapid proliferation of dams in the Mekong’s upper reaches and growing concerns over their impact on downstream communities, plans to build 11 more dams on the Lower Mekong in Cambodia and Laos were scrapped last year. The success, she said, was thanks to her team’s effort to bring the issue to international attention.

That said, perhaps the biggest achievement of Ms Pianporn’s team is the cancellation of the Lancang-Mekong navigation channel improvement project by China. If completed, the project would enable ships from China to travel to Luang Prabang in Laos through Myanmar and Thailand. The Thai cabinet decided to scrap the project in early 2020.

Ms Pianporn said the project would have greatly damaged the Mekong’s ecological system. It would also pose threats to national security by changing the natural borders between Thailand and Laos.

Given how long she has worked on protecting the region’s major rivers, Ms Pianporn said work has always been a big part of her life, and at times it is hard to separate the two. “I think about my work when I’m asleep, and it is the first thing on my mind when I wake up. But I am lucky that the places that I work at — be it rivers, streams or mountains — are all beautiful places and I want to protect them,” she said.

Ms Pianporn’s latest chance to bring the Mekong’s plight to light came at the Mekong People’s Forum, which was held on Dec 1-2 last year in Chiang Rai and observed by representatives from the United States’ and Australian embassies.

After the event, Ms Pianporn said villagers from eight provinces came forward to say they are monitoring the Mekong situation. “I believe that one day, things will be different. Perhaps our descendants will demolish the dams, setting the rivers free.”

Mekong River Being ‘Dammed’ with Uncertainty by China and Laos