Explaining the Mounting Protests by Students in Thailand
Advertisement 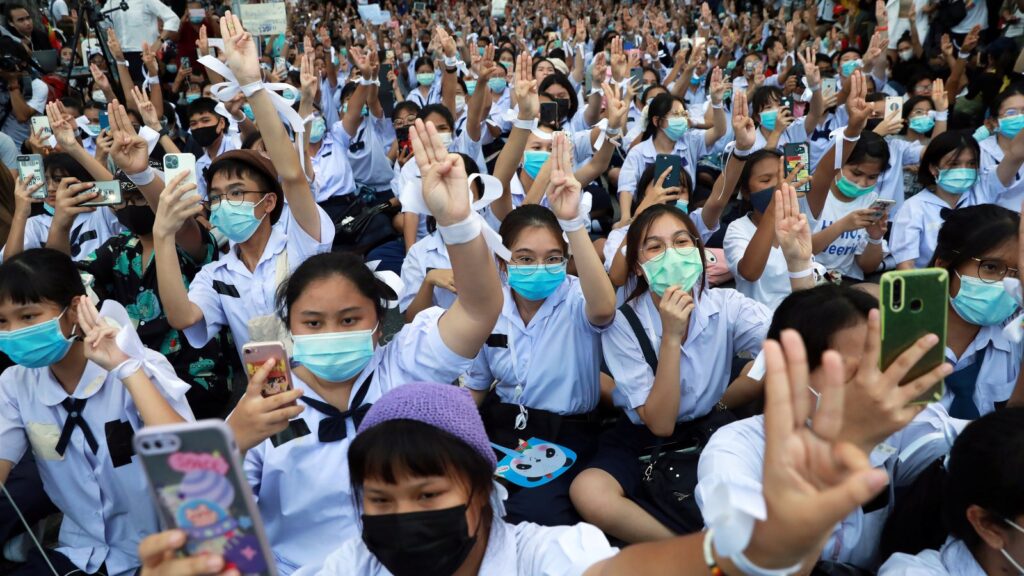 In recent months, Thai student protesters and other activists have staged a series of escalating protests in Thailand against the Government. The demonstrations initially focused on demands for constitutional change and new elections, after last year’s vote was conducted in an unfair environment.

The protestors also called for an objective investigation into the apparent abductions and murders of Thai dissidents living abroad, mostly in mainland Southeast Asia. In recent years, Thai dissidents living in Laos have turned up dead, disemboweled in the Mekong River with their bodies filled with cement, or have simply vanished.

But as the protests have grown in size and spread across the country, reaching universities and secondary schools and other locales in smaller towns across the kingdom, the demonstrators’ demands increasingly have focused on greater transparency in and reform of the monarchy.

Yet despite the monarchical taboo, and the real threat of punishment—several were arrested in late August, and royalists held a counter rally—they continue to push.  Indeed, the possibility for discussion and even reform of the monarchy in Thailand seems greater now than at any time in decades.

But the potential for a violent crackdown also seems greater than at any time since the bloodshed of 2010, when at least ninety-one people were killed. For more on the potential implications of the protests.

Thai students and other activists have staged a series of escalating pro-democracy protests in recent months, drawing some of the biggest crowds since the country’s last coup in 2014. Their demands initially focused on constitutional reforms and new elections, after last year’s vote was widely seen as skewed toward a party aligned with the military.

The demonstrators also called for an impartial investigation into the apparent abductions and murders of anti-government activists living abroad. Several Thai dissidents who had been living in Laos disappeared last year. While the bodies of others were found in the Mekong River, disemboweled and filled with concrete.

The students’ anger was exacerbated by the daytime abduction and disappearance of Wanchalearm Satsaksit, a young Thai dissident living in Cambodia, on June 4. The BBC reported that Wanchalearm was on the phone with his sister when he was kidnapped, and she heard him yelling over the line, “I can’t breathe, I can’t breathe,” as armed men apparently grabbed him.

Younger Thais are rebelling not only against the political system but also against what they see as an anachronistic society, in which their views are not fully respected.

Importantly, many young Thais who joined the demonstrations this summer come from the country’s most prestigious schools. As James Row wrote recently, this is a sign that Thailand’s elite establishment, once largely pro-military and extremely supportive of the monarchy, is showing cracks. Younger Thais, in particular, appear to be rebelling not only against the political system but also against what they see as an anachronistic Thai society, in which their views are not fully respected.

During the campaign ahead of last year’s elections, the progressive Future Forward party won the backing of a sizable percentage of Bangkok elites. Although Future Forward called for serious reforms to the military, it did not focus on the monarchy. Since doing so would have been grounds for it to be dissolved and its leaders put in jail.

The party was still dissolved by Thailand’s top court in February, probably just to silence it. Still, Future Forward’s reformist message helped lay the groundwork for demands by activists this summer.

The Thai government has ramped up pressure on the activists in recent weeks, arresting key student leaders and harassing their families. In response to a legal threat from the Thai government, Facebook blocked access in the kingdom to a popular private Facebook group called Royalist Marketplace.

Which provided a platform for critical discussion of the monarchy. The group, which can still be accessed outside of Thailand, has around 1 million members. Facebook has said it will take legal action in the kingdom to challenge the Thai government’s demand.

In response, the students have shown no sign of backing down. Two prominent activists, Anon Nampa and Panupong Jadnok, said they intend to go back to leading demonstrations after being released from jail this week. Major protests are in the works for the coming month across the country. Including one on Sept. 19 that planners say will be the biggest yet.

But the demonstrations are testing the patience of a government led by former military men not accustomed to compromise. Prime Minister Prayuth Chan-ocha, a former army chief who led the 2014 coup, warned ominously that the kingdom could be “engulfed in flames” due to political divisions. For now, the most realistic outcome of a prolonged standoff is the state using force to end the demonstrations.