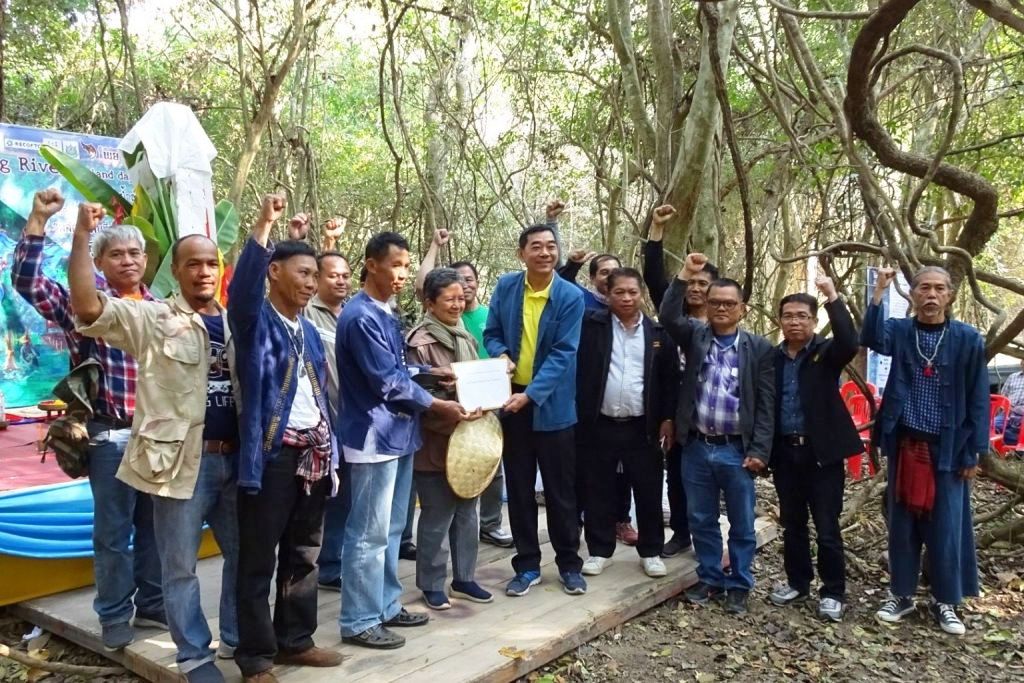 Srongpol Chantharueang remembers his parents telling him as a boy always to protect the local wetland forest when he grew up. They told him that the ecosystem would be important for his life and that of his community. “I didn’t understand what they meant at the time,” he told Mongabay via a video call. “I didn’t understand what the true value of the wetland forest was.”

Srongpol chairs the Boon Rueang Wetland Forest Conservation Group, which partnered with international nonprofits, civil society organizations and local academic institutions to share evidence of the importance of the wetland forest for biodiversity and the local community

A village leader, Srongpol lives in Ban Boon Rueang, a town in Thailand’s northern Chiang Rai province. Nestled between the Doi Yao mountain range and the lower reaches of the Ing River, a 260-kilometer (160-mile) tributary of the Mekong, Ban Boon Rueang is an unassuming town with an agrarian lifestyle that goes back generations. But in recent years, community members have been roused to take action to protect the surrounding nature that provides them with sustenance and secures spiritual connections to their ancestors.

The community averted tragedy in 2015 when the Thai central government declared the local wetland forest — a 483-hectare (1,200-acre) haven of biodiversity — a target for the development of a special economic zone (SEZ), as part of a nationwide strategy to expand infrastructure and attract foreign investment. Mobilize to protect the land

Thailand has experienced rapid economic development, accompanied by population growth, urbanization and natural resource depletion, over recent decades. Between 1961 and 1998, Thailand’s forest cover decreased from 53% to 25% of the nation’s total area, representing a loss of 14.4 million hectares (35.6 million acres) of forest. Wetlands have been over exploited, cleared for agriculture, or filled in for the development of residential and industrial estates.

Village inhabitants foresaw what the SEZ would mean for their treasured ecosystem: the wetland would be filled in with concrete and the trees cut down.

Their response was to mobilize to protect the land, which they have customarily managed for more than 200 years. The campaign successfully convinced authorities that the wetland forest was more beneficial economically and socially in its natural state. In 2018, the Chiang Rai provincial government withdrew the proposal to use the site as an SEZ — a great victory for Ban Boon Rueang and for Srongpol.

The community’s quiet and methodical revolution recently gained international recognition: they were awarded the 2020 Equator Prize by the United Nations Development Program.

“By asserting their rights to manage the wetland forest, the community members protect their rights, identity and their future,” said Warangkana Rattanarat, Thailand country director of RECOFTC, a nonprofit international organization that worked alongside the community to protect and sustainably manage the forest. “Their success is an inspiration to other communities who are fighting similar injustices and threats.”

However, while the villagers successfully fought off the development proposal, they continue to grapple with such threats as climate change and upstream dams, which harm the integrity of the ecosystem by preventing vital seasonal flooding of the wetland forest. 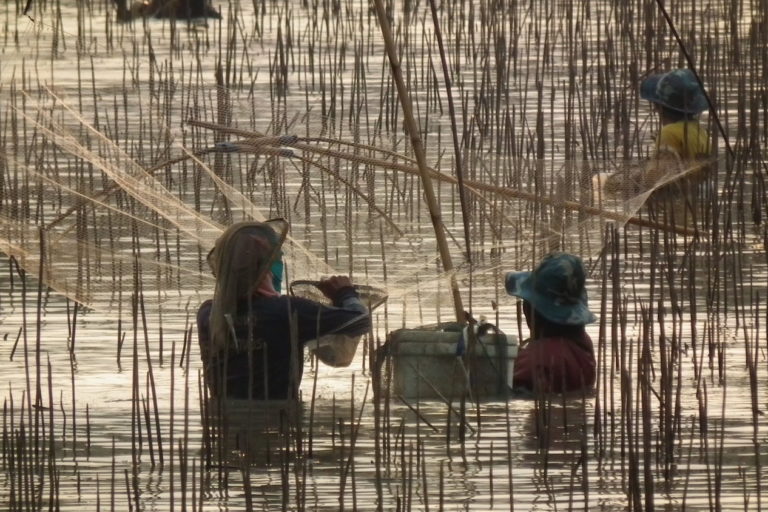 The upstream Mekong’s weakened flood pulse sets off “a domino effect throughout the ecosystem,” according to Teerapong Pomun, director of the Thai NGOs Living Rivers Association and the Mekong Community Institute, which work with communities along the Ing River to manage their wetland forests.

Dwindling water levels and the weakened Mekong flood pulse due to the combination of dams and El Niño-driven dry spells are a serious concern here. “Villagers report that the Mekong River no longer fluctuates according to seasonal flood patterns, meaning that the river levels are abnormally low and fish replenishment has decreased,” said Warangkana of RECOFTC.

In Boon Rueang, Srongpol mentions how it was once necessary to move about the wetland forest by boat during the wet season. “For the past few years, it has been possible to walk on foot year-round,” he said.

Thai civil society organizations have been campaigning against development schemes in the Mekong River for more than two decades. “We try to raise the issue among local people and petition decision-makers in China, but it is very hard to have our voices heard,” Teerapong said.

The recent inauguration of the Mekong People’s Forum, comprising civic groups from eight Thai provinces that border the Mekong, helps to address such issues at the policy level. “We need to unite our voices,” Teerapong said. “The dams are not just a problem for people living along the mainstream Mekong; this is a problem for communities along the tributaries too.” 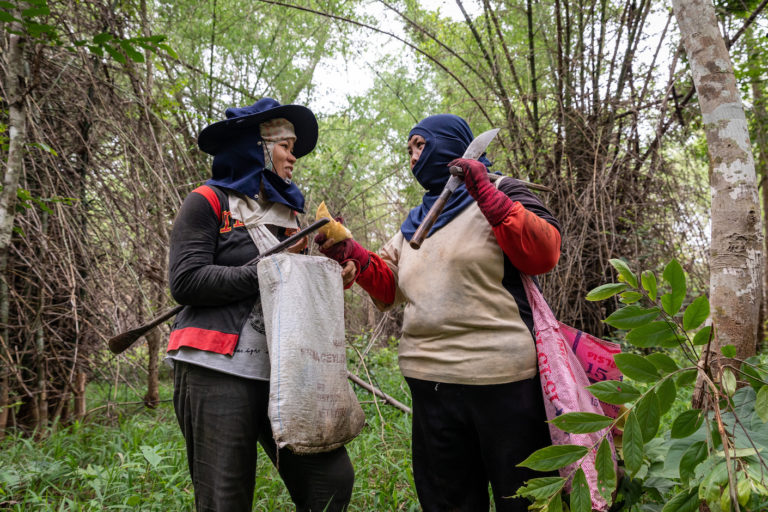 Through BRWFCG, the Boon Rueang community has an active voice in such regional advocacy platforms and continues its drive to sustain a healthy wetland forest. Its approach has inspired nearby villages to take similar action to stand up against the pervasive threat of land grabbing.

By following customary management approaches that focus on living in balance with nature, the community has mitigated some impacts. Sixty-three communities along the Ing River have established fish conservation zones, where fishing activity is restricted to protect vulnerable spawning habitats. These fish conservation zones are steeped in Buddhist traditions: the waters are blessed by a local monk and, thus, respected. Studies by Living Rivers Association have found that fish size and numbers increase in these zones. The BRWFCG is also cultivating a plant nursery and organic fertilizer system to restore the wetland forest and its soil quality.

Due to the community’s efforts, the immediate threat from SEZ development has abated. However, there is still no guarantee that developers will not target the area again in the future. Over the years, the community has repeatedly fought off attempts to convert the wetland for other purposes, such as for factories and plantations. 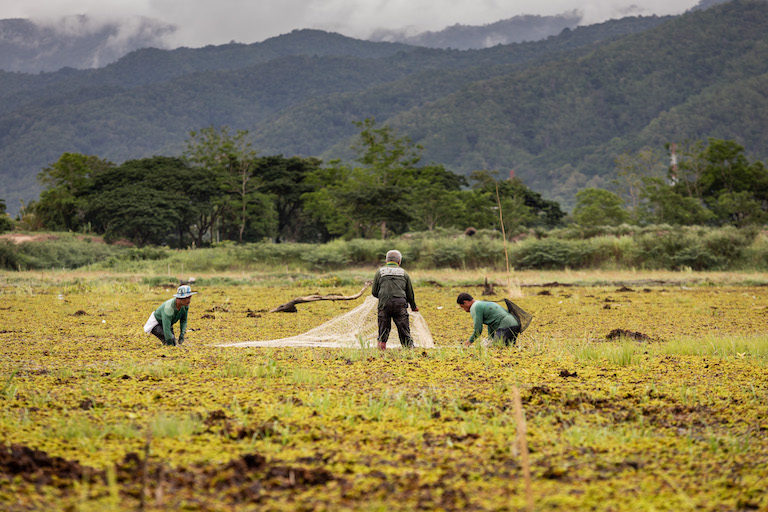 The community does not formally own the wetland forest land. In 1967, a Public Land Certification granted the community legal rights to fish, graze buffalo and establish a community forest from which they can gather non-timber forest products. Agreements that govern such activities “are not enough to protect them legally,” according to Teerapong.

For this reason, the community is working with partners to designate the wetland forest landscape of the lower Ing River, including the Boon Rueang wetland forest, for global protection as a Wetland of International Importance under the Ramsar Convention.

Although Thailand has 15 sites designated under the Ramsar Convention, totaling more than 400,000 hectares (990,000 acres) of wetlands, the habitats of the Ing River watershed are not among them.

Advocates say they hope that such protection under international law will safeguard the important wetland forest ecosystems from future development pressure.

The Ramsar bid has the endorsement of several villages and the Chiang Rai provincial leader. However, outreach and dialogue continue with communities throughout the river basin to ensure their inclusivity in the proposal. Teerapong estimates the proposal will be ready within the next two years.

For Srongpol Chantharueang, the simple sight of water buffalo grazing in the wetland sparks joy. They have been a constant in the wetland forest landscape since his boyhood. He knows his community cannot afford to get complacent. “To destroy the forest is very easy,” he said. “To protect it and improve it for nature and the local people is much more challenging.”

Mekong River Being ‘Dammed’ with Uncertainty by China and Laos