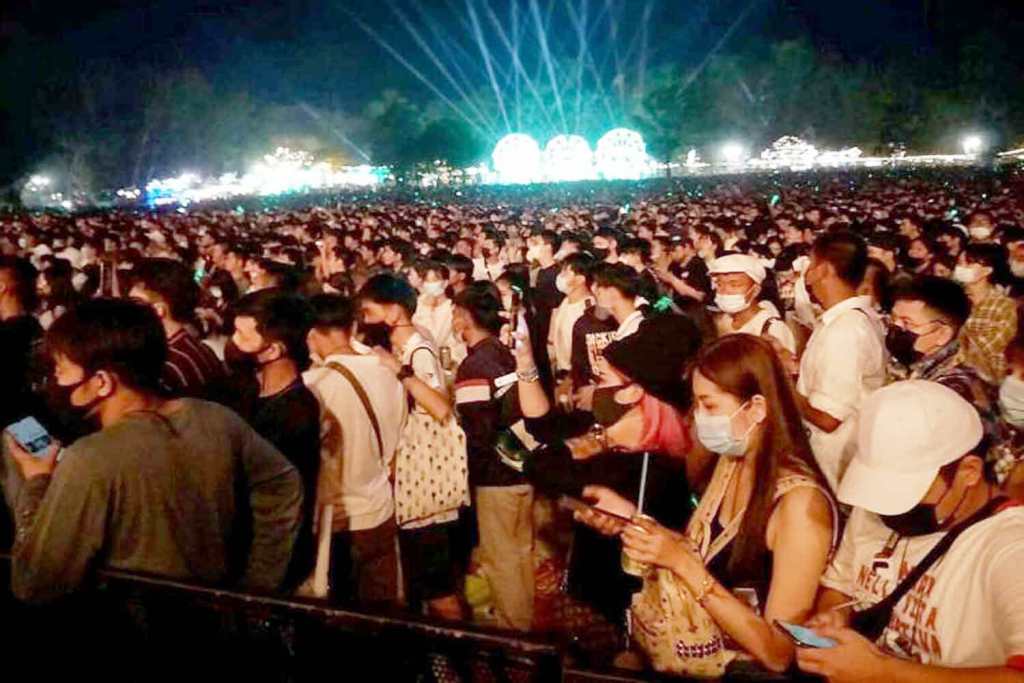 Thailand’s Prime Minister has threatened to enforce the emergency decree and prohibit the assembly of more than five people should the Covid-19 pandemic situation in the country get any worse.

Speaking to media after the controversy surrounding attempts by authorities to bring the curtain down early on the Big Mountain Music Festival over the weekend, Gen Prayut refused to rule out once again using the sweeping powers afforded to him by the decree to curtail or prevent organizers of large public gatherings.

When asked if a ban on social gatherings would be necessary, Gen Prayut said it might be if there were an outbreak. Currently, the Covid-19 situation did not warrant such a ban, said the prime minister.

Social gatherings of more than five people have been prohibited to curb the spread following the outbreak in March, he said.

Nevertheless, New Year celebrations and countdown events will be allowed to proceed but with strict rules in place, especially in Bangkok, the prime minister said.

Gen Prayut insisted that the order to shut down the concert was not politically motivated and he was unaware of the content of the performances. Asked about the risk posed by the ongoing political demonstrations, he said protesters must not violate the law and all attendees should be screened.

The Centre for Covid-19 Situation Administration (CCSA) also on Monday re-emphasized the need for organizers of New Year celebrations to adhere to “new normal” rules in the wake of the confusion surrounding the Big Mountain Music concert abrupt end.

CCSA spokesman Taweesilp Visanuyothin said concerts with crowds were a risk, but the government would not cancel any events at this time and would instead focus on policing the public safety measures put in place by the organizers.

Meanwhile, Nakhon Ratchasima governor Wichian Chantaranothai, in his capacity as chairman of the provincial communicable disease committee, said he had filed complaints with Pak Chong police against the organizers of the Big Mountain Music Festival for violating the committee’s order to end the concert early.

The festival organizers could face up to a year in jail and/or fine of up to 100,000 baht, according to the governor.

The concert went ahead on Sunday in defiance of the governor’s order cancelling the second day over coronavirus fears. The organizers had posted on the event’s Facebook page that Sunday evening’s performances were to end at 10pm after negotiations with provincial authorities in Thailand.

The governor also dismissed the rumors that the order to shut down the concert was politically motivated, saying other concerts and festivals that had been granted permission were allowed to be held as scheduled as the appropriate public safety measures had been taken.

President of the Khao Yai Tourism Association Phanchana Vatanasathien said the association had continually asked its member entrepreneurs to strictly comply with the Amazing Thailand Safety and Health Administration standards to ensure safety for visitors.

In the capital, Governor Pol Gen Aswin Kwanmuang said he had instructed the Bangkok Metropolitan Administration (BMA) to inspect businesses where restrictions have been relaxed, in particular areas at risk of becoming hotspots such as boxing stadiums and entertainment establishments.

The BMA would at the same time step up efforts to round up and test migrants who had illegally entered the country without undergoing the mandatory two-week quarantine, Pol Gen Aswin said.

Deputy Bangkok governor Pol Lt Gen Sopon Pisuttiwong who is chief of the Bangkok branch of the CCSA, has instructed all 50 districts in Bangkok to conduct onsite inspections at every boxing stadium, pub, bar and karaoke venue in the city from Dec 9-15.

The BMA, he stressed, was determined to make sure that standards would not slip and was itself stockpiling face masks and hand sanitizers for widespread public distribution should an outbreak occur.

All schools in Thailand and early learning centres would continue to be required to take pupils’ temperatures, while any found to have contracted the relatively common Respiratory Syncytial Virus (RSV) would be told to stay home and recover, he said. – Bangkok post