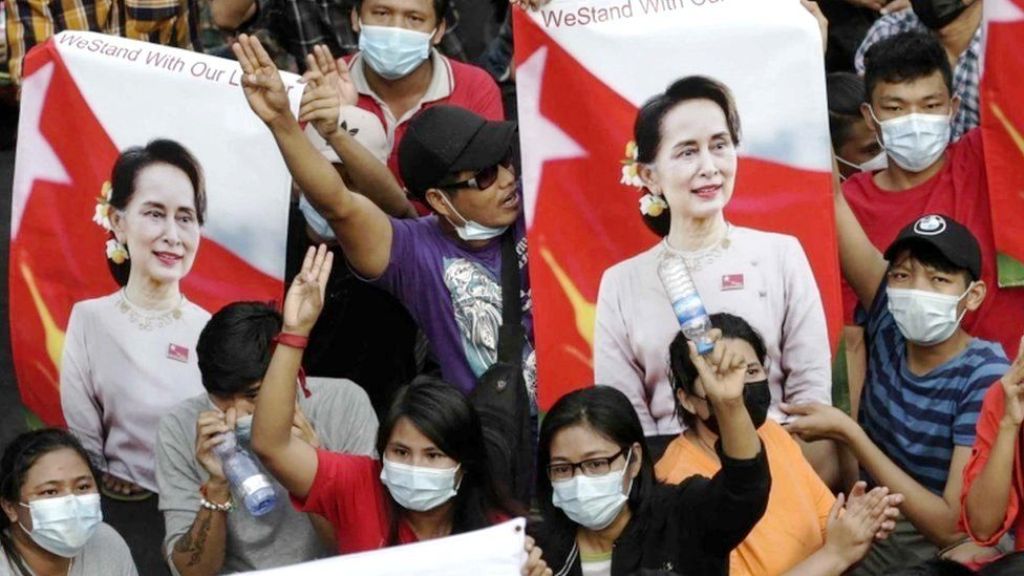 Foreign businesses in Myanmar have begun to act following the coup, with some explicitly indicating that military rule is against their governance principles.

While the possibility of sanctions by Western nations grows by the day as US President Joe Biden called on Myanmar’s generals to relinquish power, while EU leaders condemned the military coup and detainment of the National League for Democracy leaders.

Bloomberg News reported Japan’s Kirin Holdings Co said it will end its beer partnership with Myanma Economic Holdings Public Co. The main business arm of the Myanmar military, as the coup is “against our standards and human rights policy”.

Japan’s mega car giant Suzuki also temporarily halted operations at its two Myanmar factories. The factories  produced 13,300 vehicles in 2019 — almost all of which were sold in Myanmar.

An industrial estate developer with a presence in Myanmar, SET-listed Amata Corporation said it will stop its 140-million-baht first-phase investment in Yangon Amata Smart and Eco City indefinitely until a new election is called in the country.

Thailand ranks third after Singapore and China in terms of foreign direct investment in Myanmar, with a value of US$24 registered in 2020, according to the Thai National Shippers’ Council (TNSC).

Cross-border trade between Myanmar and Thailand was worth 165 billion baht last year, according to the Commerce Ministry’s Foreign Trade Department.

The Federation of Thai Industries (FTI) is assessing the situation in Myanmar daily, saying businesses need to brace for economic uncertainties as a result of reactions from the international community to the power grab.

Whether the US and European countries impose economic sanctions must be monitored, and the relationship between the military regime and China must also be scrutinized, said FTI vice-chairman Kriangkrai Tiannukul.

“If sanctions are imposed, the economy and foreign investment in Myanmar will be affected, even though the regime promised to hold a new election within one year,” he said.

“Even Thailand may be under the spotlight as we border Myanmar and China and Myanmar have a good political and military relationship,” he said.

During a meeting of the Joint Standing Committee on Commerce, Industry and Banking last week, the group had a mixed evaluation of the effect on the Myanmar and Thai economies.

While possible sanctions may affect the exports of some foreign companies in Myanmar, Thailand could see more exports from these companies, using Thailand to avoid the sanctions, thus boosting border trade with Myanmar, according to the FTI.

Export volume in Myanmar is low because foreign investors are focused on the domestic market, said Mr Kriangkrai.

There are up to 150 Thai companies investing in Myanmar, he said. Among them is Thonburi Healthcare Group (THG), which formed a joint venture with local companies to run two hospitals in Rangon and Mandalay.

THG chairman Boon Vanasin said the group’s medical services, which are especially needed during the pandemic, remain operating as usual.

However, with the political conflict, the company needs to carefully consider whether to delay its hospital expansion project in Yangon, which was planned for later this year, he said.

One day after the Myanmar military staged its coup, Norwegian telecom Telenor Group issued a statement expressing concern about the situation. Telenor said its first priority is to ensure the safety and security of the employees of its subsidiary, Telenor Myanmar.

The company confirmed network functionality was fully restored as of Feb 2.

“Telenor Group continues to support the progress Myanmar has made towards openness and democracy. We are following the developments and are working closely with our local team,” the company’s statement read.

Total Access Communication (DTAC), the Thai subsidiary of Telenor, indicated on Feb 1 due to ongoing network interruptions in Myanmar, “some mobile traffic from Thailand has been limited”.

The network was in recovery mode at that time and the company plans to monitor the situation closely, it said.

Responding to the request, the company said it does not believe it was based on “necessity and proportionality, in accordance with international human rights law”. However, the company decided to comply with the order.

“Telenor Group believes in open communication. Together with Telenor Myanmar, we are actively looking to restore access to Facebook as soon as possible,” the company said.

A former executive of a telecom company investing in Myanmar, who requested anonymity, said the turmoil there is likely to drag on for a certain period of time, which could level its economy before a recovery is possible.

“However, there is still room to grow the Myanmar economy, especially in the telecom sector, which is among the core infrastructures,” said the source.

The former executive said Myanmar’s economy is far from what is called “an application economy”, driven by innovations and digital tech adoption among businesses and people in their daily lives. More needs to be done via investment in the segment and with the support of necessary infrastructures, said the source.

Somsak Pejthaveeporndej, chief executive of VST ECS (Thailand), a major IT distributor that has had a representative office in Myanmar for seven years, said the coup disrupted air freight shipments initially, but they have now resumed as normal.

Yet any US actions would have a major effect, particularly placing the regime on a blacklist or trade embargo, he said.

If a trade embargo is applied, VST ECS, which sells US technology equipment and solutions to Myanmar, would be affected, said Mr Somsak.

Business leaders are also concerned about a possible limit placed on cross-border transactions, as this could delay payment from corporate customers in Myanmar, he said.

Mr Somsak said the company downgraded its sales growth outlook in Myanmar this year from 20% to 12%. Myanmar is expected to contribute 3% of total earnings this year.

Somchai Sitthichaisrichart, managing director of SiS Distribution (Thailand), a tech product distributor, said the company has around 10 Myanmar dealers who have established their offices in Thai-Myanmar border areas.

Following the coup, orders have been frozen, with dealers saying they want to wait and see regarding border trade policy and shipments, he said.

Despite a growing possibility of Western sanctions and business hurdles, the military coup is unlikely to affect much of Thailand’s trade and investment as the political crisis in Myanmar is expected to ease soon, according to a local shipping group.

“We believe the Myanmar military thoroughly understands its situation, as it remains heavily reliant on other countries. If the emergency decree is effective for only a year, Thai trade and investment are unlikely to see much impact,” said Visit Limlurcha, vice-president of the TNSC.

However, in a worst-case scenario Thai products and raw material shipments may see lower exports if Myanmar is hit with economic sanctions from Western nations, said Mr Visit.

If Myanmar decides to shut down permanent border checkpoints, the private sector may look to alternative checkpoints such as Singkhon Pass in Prachuap Khiri Khan and the Ranong Port, shifting to water or air transport instead of land.

Pun Paniangvait, manager of President Office at Thai President Foods Plc, the manufacturer of Mama instant noodles, said the company has never experienced any major impact from changes of Myanmar governments through more than 10 years of operation in the country.

“We have experience doing business under administrations run both by the military and parliamentary democracy. Myanmar governments have never issued any policy that is considered an obstacle to doing business in the past. However, we will closely watch the situation,” Mr Pun said.

The company is maintaining its expansion plan in Mandalay this year, he said. “Our biggest worry is Myanmar’s foreign exchange rate,” Mr Pun said.