Cash Handout Shelved Due to Struggling Economy and Coronavirus
Advertisement 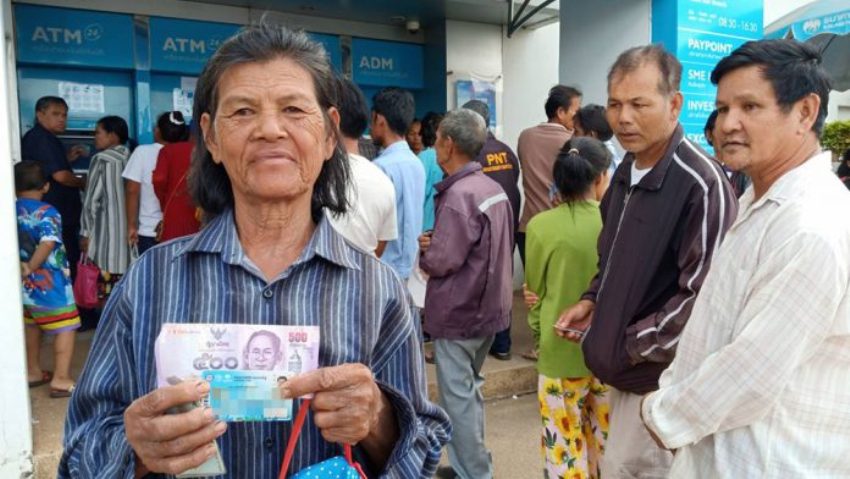 Thailand’s Prime Minister has shelved a plan to hand out money to low income earners in a bid to prop up a sagging economy. An economy now reeling under the added impact of the coronavirus epidemic.

Prime Minister Prayut said on Monday the proposed 2,000 baht handout will not go into the cabinet on Tuesday. However other measures were on course for consideration by the ministers during their regular weekly meeting.

A meeting on the economy by ministers on Friday approved a 2,000-baht cash freebie for low-income earners, farmers and freelancers. It was part of a 100 billion baht package to fight Thailand’s floundering economy.

However the handout was widely criticized on and off social media as a waste of money. Also a misguided priority at a time when people are struggling to shield themselves from the coronavirus.

The number of Thais living in poverty has fallen dramatically over the past 30 years but the downward trend is now reversing. Above all due to Thailand’s sluggish economy.

The Bangkok Post said that a report found the spike in poverty coincided with emerging and shifting economy and also environmental challenges.

Over the past few years, Thailand’s growth rate has dropped lower than other large developing Asia-Pacific economies. During the fourth quarter in 2019, Thailand had among the lowest GDP growth rates in the region, at 2.7 per cent. The severe drought has also impacted the livelihoods of farmers, who are already among the country’s poorest.

Since poverty data were first published in 1988, Thailand’s poverty rate has increased five times, most recently in 2016 and 2018. Thailand is the only Asean country to experience several increases in poverty since 2000.

China Economy in a down spin

The coronavirus outbreak has been brutal for China and could plunge the China economy into its first contraction since the 1970s. Economic activity sharply declined across the board in February. Companies are struggled to reopen for business or hire workers during a government-mandated shutdown. If the China economy struggles this will create a trickle down effect on Thailand. Thailand has become dependent on China for investment and tourism.

Wednesday revealed shockingly bad news for services in the world’s second biggest economy. Chinese media group Caixin said its purchasing managers index for the sector plummeted to 26.5 last month from a reading of 51.8 the month before. The lowest figure recorded by the survey since it began in 2005. A reading below 50 indicates contraction, rather than growth.

That data which mostly follows small and medium-sized companies was released over the weekend. China’s factories also recorded their worst month on record in February. According to government and Caixin data, as companies face extended closures to contain the coronavirus. Or struggled to fill jobs because of travel restrictions. Travel restrictions that are also effecting Thailand’s economy.