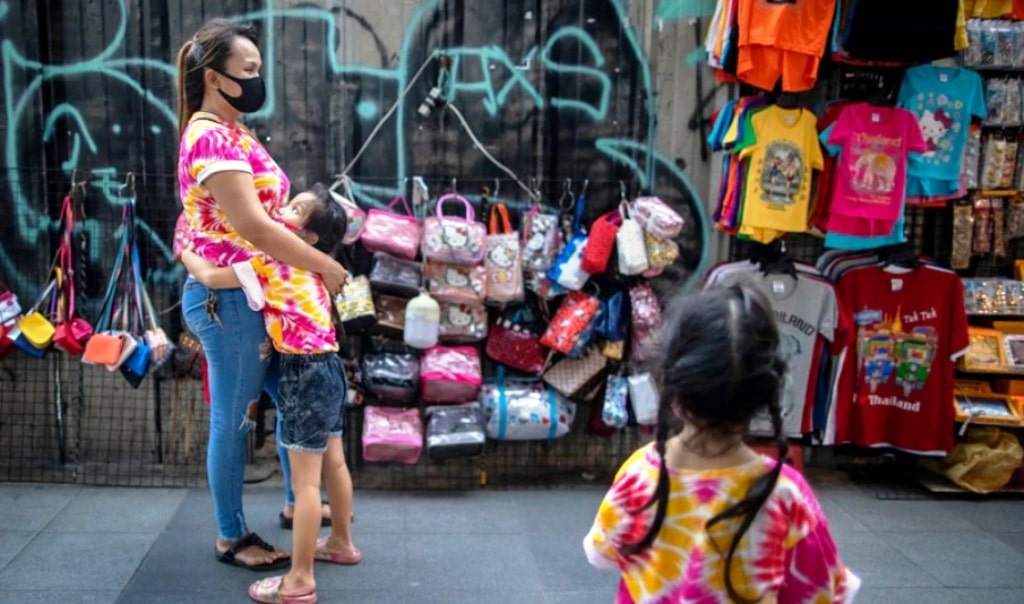 With a pandemic gutting the economy, economic hardship from the coronavirus pandemic has push Thailand’s single mothers to make some tough choices

With a pandemic gutting the economy and a family to feed, Pah – a single mother – works odd jobs by day and sells drinks in Bangkok’s entertainment industry at night, one of an untold number of women at the sharpest end of Thailand’s unprecedented economic crisis.

Southeast Asia’s second biggest economy has, so far, avoided the worst of the public health crisis caused by the virus.

Instead, it has been battered by the economic costs of a collapse of tourism and diminishing global demand for its exports.

On Monday the Office of National Economic and Social Development Council (NESDC) announced a 6.1% contraction in gross domestic product over 2020, the worst in two decades.

This year has started badly, with renewed partial lockdowns after a resurgence of the coronavirus and the continued absence of foreign visitors. The NESDC warned tourists are unlikely to return until deep into the fourth quarter as vaccines rollout and travel restrictions ease.

The coronavirus pandemic has resulted in economic oblivion for the kingdom’s poorest, especially for women from the Thai provinces who are by expectation – and economic reality – often family breadwinners. Among them is 33-year-old Pah.

She has a 12-year-old daughter at home in the rice-farming province of Sri Saket in the populous but poor northeastern Isaan region.

Pah moved to the country’s economic powerhouse of Bangkok several years ago to work in retail. She is the only reliable income for a family that also includes an elderly mother and two younger siblings.

“I’ve lost more than half my income during this second outbreak. So I’ve taken on any jobs available… ironing clothes to packing boxes for people moving house,” she says, giving only her nickname for her safety.

Millions of women – many single mothers – have left the countryside for Bangkok and tourist hotspots such as Pattaya and Phuket to work in the service sector — from restaurants and bars, to massage spas and the kingdom’s large sex industry.

As the second outbreak hollowed out her income, Pah had little choice but to take work in a street side bar – operating illegally during an alcohol ban – in one of Bangkok’s red-light districts, pressing her onto the fringes of the kingdom’s sex industry during a pandemic.

“I’m really stressed about money. It’s really affecting my mental health. But I’m carrying so much responsibility and I have to make sure I can still support my family.”

Statistics are hard to come by

The government has pledged $7 billion in relief payments for full-time workers suddenly made unemployed, and promised co-payment plans to encourage Thais to spend at street stalls and other small businesses.

But the maximum handout per person over the two rounds of virus is $740 (22,000 baht) – far from enough to cover a year lost to the pandemic. There are also widespread complaints of unequal distribution of government funds.

“Women are over represented in the sectors and jobs which are hardest hit by COVID-19 – manufacturing, textile and garments, care services, hospitality and tourism,” UN Women Thailand said in a statement to VOA news.

They are in “the most vulnerable types of employment with the least protection, such as workers in the informal sector, the self-employed, domestic workers, daily wage workers.”

Also, their situation is exacerbated by responsibilities at home from care for children and elders, to running households.

In a sign of the economic misery gripping the country, photos circulated on Thai social media on Monday showed large queues of elderly in the provinces who have been unable to register for the latest $230 (7,000 baht) handout – a scheme dubbed ‘we-win’ – because they do not own a smartphone.

It is even more disheartening for the hundreds of thousands of women in Thailand’s vast sex industry, which the government broadly turns a blind eye to but does not recognize as legitimate work, therefore rendering women in the industry ineligible for its relief schemes.

A 2017 study by the foundation, an advocacy group for sex workers, found on average each sex worker provides for five family members.

“That’s why many women turn to work in the entertainment industry,” Thanta added.

With bars closed in Bangkok and with virtually no foreign visitors to Pattaya and Phuket women in the entertainment industries there are going online for new revenue streams. Many are being bought virtual drinks over Facebook live streams by customers trapped at home from the United States to Britain and China.

“These women will find other ways to make sure their families are taken care of. They won’t give up,” said Thanta.

Driven by duty to provide, for many women like Pah there is no choice but to risk working in shadowy businesses during a virus outbreak.

“Life’s always been hard… now COVID is really kicking me to the bottom,” she said, tears flowing. “What can you do? I was born poor, there’s no other choice but to keep fighting.”