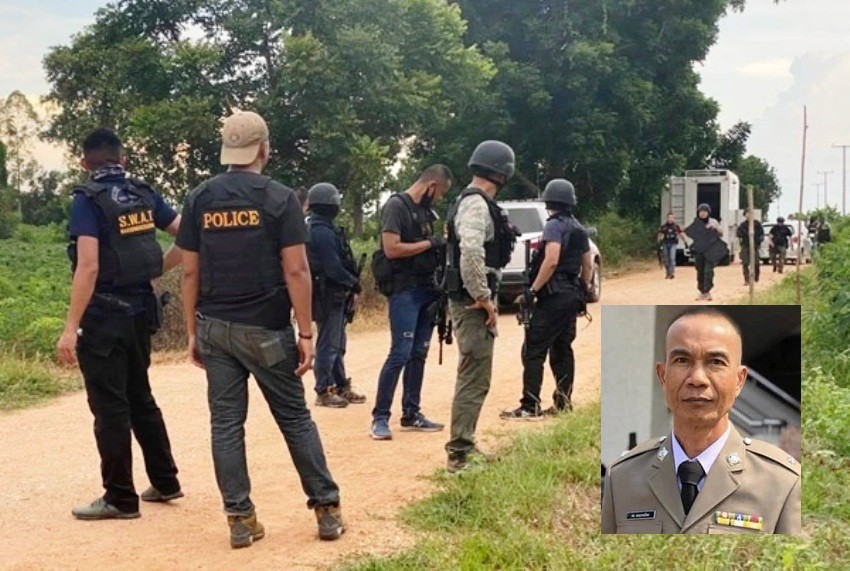 Police are hunting for a suspected drug dealer after undercover policeman was shot and seriously wounded in a drug sting operation. The Shooting happened in Northern Thailand’s province of Nakhon Ratchasima.

After realizing he was in a sting operation Mr. Phadungsil Lohakart, 38, shot Pol Sub Lt Song Tuaykrathok, who was posing as a crystal meth buyer. Two other officers were waiting in a car nearby.

Pol Sub Lt Song was hit in the chest and right arm and was rushed to hospital in Nakhon Ratchasima.

The suspect fled into a nearby cassava plantation on Ban Leum Road in tambon Nong Bua. Extra police were quickly summoned and surrounded the plantation, but the suspect allegedly escaped.

The hunt widened in the morning, with checkpoints set up along roads after local residents reported seeing an armed man on foot.

Police were tailing the suspects who took the drugs from Mukdahan in Northern Thailand and planned to deliver them to customers in Udon Thani. Udon Thani police chief, Pol Maj Gen Pissanu Oonhaseri, said 4 people were in a pickup truck carrying the drugs. They were intercepted at a petrol station when they stopped to buy some drinks.

Two young men were arrested while two others fled. The meth pills were found in a secret compartment under the backseat of the pick-up truck.

Pol Maj Gen Pissanu said the two suspects said they were each paid 30,000 baht per delivery of up to 200,000 meth pills by a drug trafficking gang.

The gang also gave them between 5,000-10,000 baht in petrol money. The suspects told police they had made nine deliveries before they were apprehended.

In Nakhon Phanom, a monk was arrested for taking meth pills with a friend at Wat That Foon in tambon Nong Yat. Phra Amata Saenyear, 38, and drug dealer Chanchai Kuiyasuk, 37, were also busted by local administrative officials.