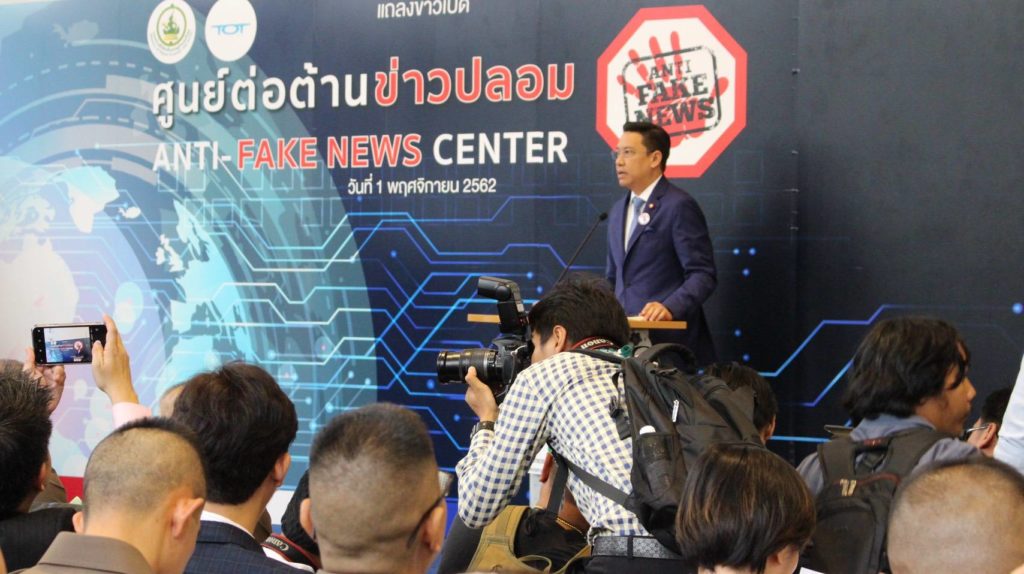 Thailand’s anti-fake news centre has reported the arrest of two people for posting misleading information about the coronavirus on social media. There arrests follow a crackdown on the creating of fake stories about the virus.

The charges were in relation to a false report about infections in Pattaya. Also of an edited video clip of a Chinese man collapsing.

Four other suspects have been given a stern warning because they did not have any malicious intent. Cyber police are also investigating another nine cases. A special task force is working on locating them because they had provided false locations.

According to the Bangkok Post the Anti Fake News Centre, supervised by the DES Ministry, has received 7,587 items of suspected fake news from Saturday to Wednesday.

Most of them involved fake patients; the alleged scrapping of thermal screening at airports; allegations of the number of infections being covered up; and claims that some products can kill the virus.

To counter the spread of fake news, he said the ministry was working with health authorities to produce easy-to-understand infographics for the public.

“When it comes to health, people will believe and share anything,” he said. Urging people to check facts before they forward any content.

He also said that the Public Health Ministry has been transparent with information and is continuing to step up surveillance to prevent the spread of the virus.

Meanwhile, while China and nations throughout the globe work to limit the spread of the deadly virus, tech giants Facebook, Google, and Twitter are all working toward limiting the spread of misinformation fake news about the virus shared on their platforms.

According to a Washington Post report from January 27, Facebook, in particular, has tried to limit the spread of conspiracy theories about the Wuhan coronavirus. Including one that the US government manufactured the deadly disease. Though, according to the Post report, the process has not been easy. Much of the misinformation on Facebook occurs in private groups which are difficult for Facebook to monitor.

Other social giants, like Google and Twitter, have also attempted to limit the spread of fake news. When Twitter users search for coronavirus, the company directs them to to the Centers for Disease Control. While Google-owned YouTube said its algorithm favors videos from credible sources.