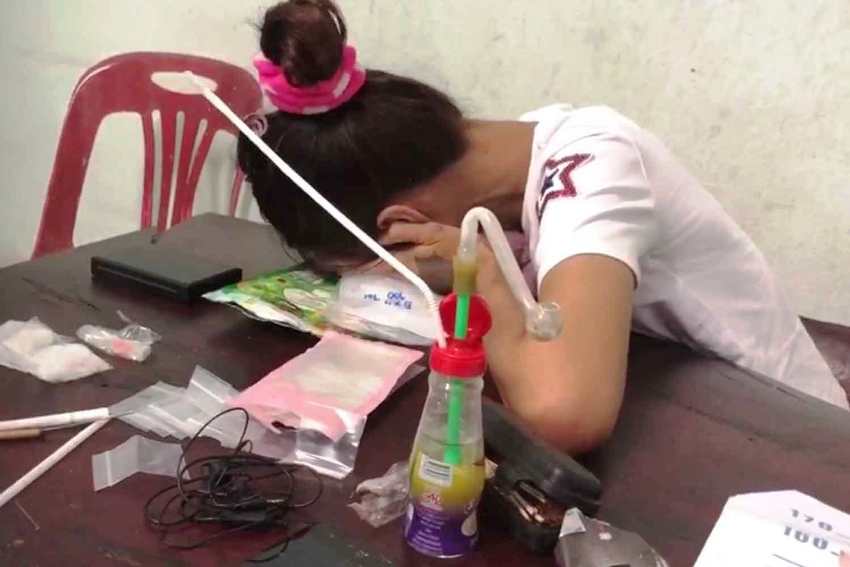 Police in southern Thailand have arrested a woman was and seized 20,004 meth pills and 28 grams of crystal meth  at a house in Hat Yai district on Tuesday morning.

Acting on a tip-off, police broke into a house at Moo 7 in tambon Khlong Hae through the back door.

They found only Miss Kittima Ronnakan, 22, in the house. Their prime target, her husband Sompop Chaimit, 49, escaped. Police said he slipped out of the house through the front door as they burst in.

He left Miss Kittima alone, police found her sitting at the dinner table, the Post reported.

A search of the house revealed 28gm of crystal meth in packets under the dinner table. They also found 10,004 meth pills in a suitcase in the bedroom.

With Miss Kittima’s cooperation, the police also found another 10,000 meth pills hidden in a cement pipe.

Miss Kittima said her husband had recently brought home 100,000 meth pills. Most of them had been sold to clients, according to police.

She was consequently charged with having drugs in possession with intent to sell. Police were looking for Mr Sompop, who was released from prison only late last year. He served time because of previous drug convictions.

Pol Lt Gen Chinapat Sarasin, head of Narcotics Suppression Bureau in Thailand, said on Tuesday that Jitboon Pichianpak, 37, was detained in Muang district of Nonthaburi. He did not reveal when.

The arrest followed an investigation into online drug trafficking via LINE app and a Twitter account named “Hifull”. The drugs were delivered by normal courier.

Mr Jitboon was one of five suspects arrested. Officers also seized 200 grammes of crystal meth, or “ice”, and 3,000 methamphetamine pills. Some of the drugs were found in a talcum powder tin at a rented house in Muang district of Nonthaburi, Pol Lt Gen Chinapat said.

Mr Jitboon was the administrator of the social media accounts that allegedly received orders for drugs. The illegal business had been operating for some months, the Bangkok Post reported.

Mr Jitboon allegedly admitted selling drugs to 5-8 buyers a day, and said his father was unaware of his activities. He turned to selling drugs because his normal trade in other merchandise was in a slump.