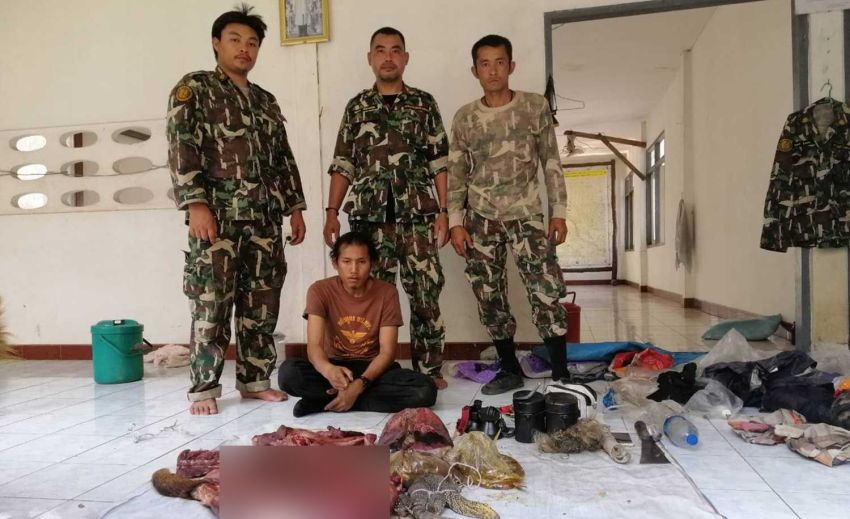 A poacher has been arrested in a wildlife sanctuary in Kanchanaburi in possession of two dead animals and some wild honey. Three other men fled after allegedly injuring a forestry official with a knife.

Wildlife rangers spotted four armed men carrying sacks inside Salak Phra Wildlife Sanctuary on Wednesday evening. They called out for them to stop for a search, but they ran away, said Niphon Chamnonsirisak, director of Forest Conservation Zone 4.

As the rangers gave chase and one of the fleeing men allegedly cut him in the right arm with a knife.

Three of the men escaped, also abandoning the poached animals as they fled. The fourth man, identified as Wasin Kaki, of Sri Sawat district, was captured.

A sack containing the carcass of serow, (Antelope) weighing about 14kg; dead monitor lizard; also about 1kg of wild honey and also a knife were seized.

Under questioning Mr Wasin, identified his three poaching companions as Roeng; who assaulted the ranger; Roon, and Daeng. Furthermore all were residents of tambon Nong Ped in Sri Sawat district.

Mr Niphon said Mr Wasin and his three accomplices now face charges under the Wildlife Protection Act. Their offences carry a penalty of 3-15 years in jail and also fine of 300,000-1.5 million baht.

Other charges relating to illegal hunting carried jail terms of up to 10 years and/or fine of up to one million baht. he said. The three men are now being hunted by wildlife officials.

Salakpra was Thailand’s first wildlife sanctuary, created to protect a rich forest fauna close to Bangkok and the famous River Kwai. Over the years, it has been diminished and abused through neglect and poaching. A Growing human population around it has also altered, still uncertain boundary’s.

As a result, Salak Phra Wildlife Sanctuary is now a badly damaged, peninsula arm of WEFCOM. Home to shockingly few wild animals other than 130-150 elephants whose forest home is degrading every day. Above all at the hands of local people and outsiders exploiting it for free. Once a symbol of Thai pride, it is now a symbol of shame.