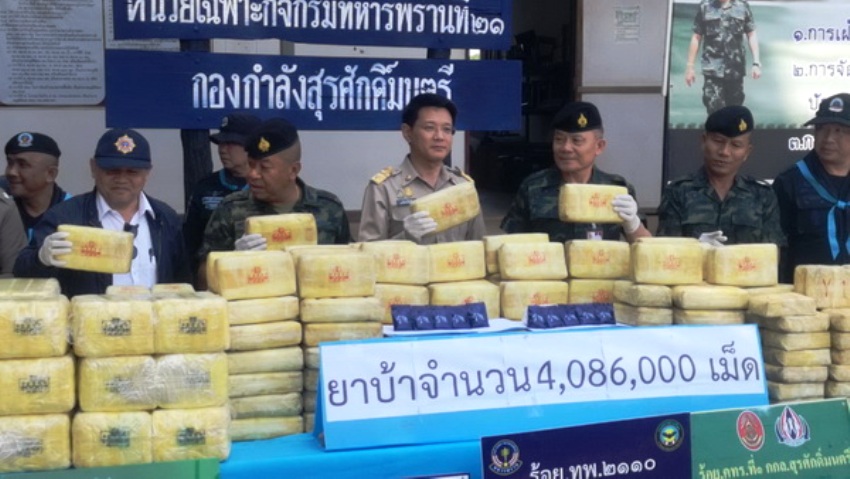 The meth pills were found by a unit from the 21st Ranger Task Force patrolling the Mekong river bank in Nakhon Phanom. Rangers were tipped-off that a large shipment had been smuggled across the Mekong from Laos by boat.

Nineteen fertiliser sacks were found on the river bank and three men detained as they arrived to collect them. Furthermore the sacks contained 4,086,000 meth pills in total, Thai media reported.

One of the men said he was paid 3,000 baht to accompany the other men to fetch goods for delivery. He was unaware they were picking up meth pills.

Maj Gen Sawarat also said the seized meth had an approximate value of about 500 million baht on the black market.

On Feb 5th, police in northern Thailand’s Lampang, province arrested the driver and seized 172,200 meth pills. Also about 70 kilos of crystal meth. The drugs were found during a search of his pickup at a drug road checkpoint in Lampang.

Pol Maj Gen Anucha Uamcharoen, said the truck told reporters that the pickup was loaded with vegetables enclosed in an steel cage. Police discovered a large sack hidden under the vegetables.

The sack contained 172,000 meth pills and also 35 packages of crystal meth, weighing about 70kg in total. Pol Maj Gen Anucha said the driugs had a street value about 100 million baht.

The driver allegedly confessed he was transporting the drugs from Chiang Rai to central Thailand.

He was taken to a Lampang police station for further legal action. Consequently he was initially charged with transporting illegal drugs with intent to sell