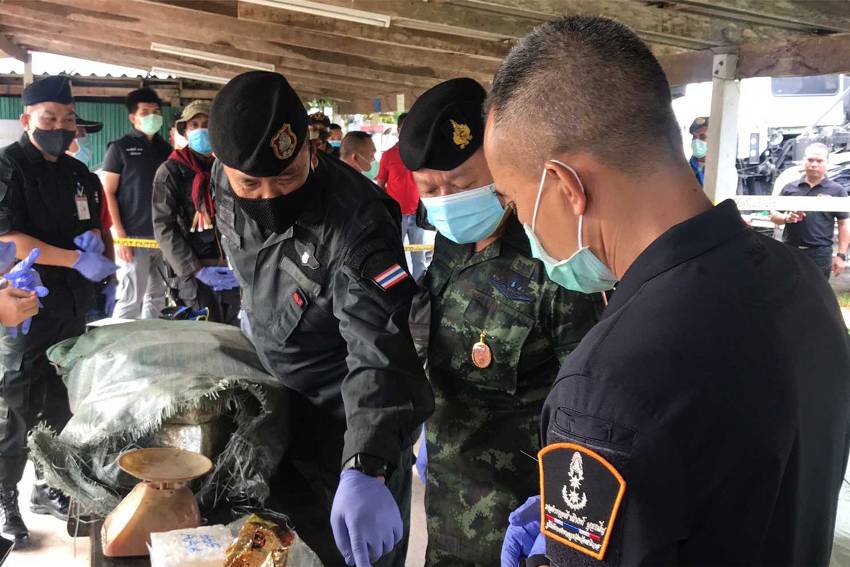 Police and soldiers have arrested 2 men in Southern Thailand and seized 1,420kg of crystal meth found hidden in a flat deck trailer truck. They were apprehended in Tak Bai district of Narathiwat in the early hours of Thursday.

According to the Bangkok Post, a combined team of police, soldiers and local officials was dispatched to a village in tambon Na Nak of Tak Bai district following a tip-off. They received information that a large quantity of illicit drugs would be smuggled into this border area of southern Thailand.

At around 2.30am, the team noticed a 18-wheel trailer truck parked along a local road in Padador village. The Two men were inside the truck. Officers then asked to search the vehicle, which was loaded with steel bars.

The two men gave conflicting statements and acted suspiciously during questioning. The officers then took the pair and their vehicle to a nearby police station.

During the search, the security team found 35 fertiliser sacks containing 1,420kg of crystal meth hidden in the trailer truck.

Thailand is Southeast Asia’s meth “superhighway,” with drugs from remote Myanmar labs. Crystal meth is pouring over the border destined for the local market or overseas.

Millions are hooked on drugs in Thailand, where prisons are stuffed with petty dealers and addicts. But the drug syndicates remain beyond reach. Hidden behind a web of middlemen and complex money laundering schemes.

Authorities in Thailand say they are finally ready to change the game. By going after drug money sloshing through Thai banks, construction businesses and cryptocurrency accounts.

“We have found an irregular flow in the banks of US$5.4 billion – it may not all be drugs,” Justice Minister Somsak Thepsuthin told reporters.

“But we are confident there is at least $388 million in drug-related assets. Drug money is being turned into gold, zinc (panels), steel rods and oil.”

Thailand’s get-tough message follows the recent unspooling of several networks. Who bought oil with drug profits and traded it on international markets as well as transforming dirty money into construction materials for sale such as steel pipes, roofing and machinery.

Crystal Meth and the Golden Triangle in Northern Thailand

The UNODC estimates they are making between $30-$60 billion a year and are the biggest meth producers in the world. The meth is produced in the Golden Triangle bordering northern Thailand’s Chiang Rai Province.

Cutting across northern Thailand, Laos, China and Myanmar. Where armed rebels are the law and drug lords lease jungle labs under their protection.

The market-leading syndicate is believed to be the Sam Gor group, dominated by Chinese gangsters. Who control at least 40% of Asia’s meth. Sending their signature tea packets stuffed with “ice” across the Asia-Pacific region

The UNODC’s Douglas added: “The message is you can’t just stop at the drug seizure.