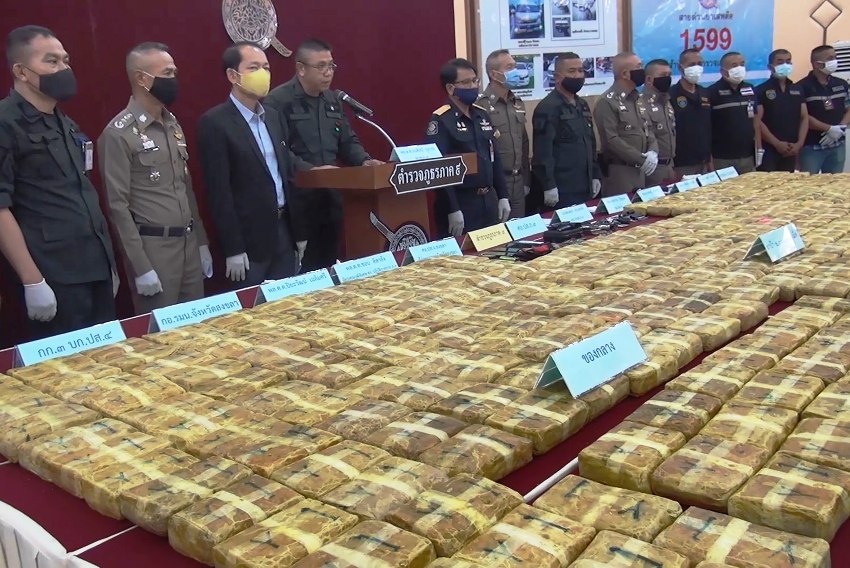 Millions in Drugs have been seized after drug suppression police took down a major drug smuggling operation in Southern Thailand. They arrested four members of a major drug gang in Hat Yai.  Police seized 2 million speed pills worth Bt80 million (US$2.5 Million) from them.

The suspects were identified as Arneesa Yeng, 30, Wisarut Almart, 34; both natives of Mayor districts of Pattani; Pari Mayusor, 36, of Narathiwat’s Waeng district and a 19-year-old teenager; identified only as Apichart, 19, of Narathiwat’s Sungai Kolok district.

Police investigators have closely monitored activities of this drug gang since 2017. They recently learned that drugs would be smuggled from the North to a house Hat Yai. , Pol Lt Gen Ronnasilp said officers searched the house and found packs of 2 million meth pills in fertiliser sacks.

Ms. Arneesa and Mr Wisarut were apprehended and three pistols and other items seized from them during the raid on June 16, said the regional police chief.

While police were interrogating Ms Arneesa and Mr Wisarut on that day, a phone call was made to one their phones to order 400,000 speed pills. The officers then plotted to capture the other two drug gang members. Mr Pari and Mr Apichart on Hat Yai-Pattani Road in tambon Khuan Lang of Hat Yai district.

The seized drugs, with a market value of about Bt80 million baht, were destined for a neighbouring country. The investigators are also extending the investigation to arrest more smugglers,according to the Bangkok Post.

A new report from the United Nations Office on Drugs and Crime (UNODC) warns that the synthetic drugs market in Southeast Asia continues to expand and diversify. Furthermore the price of meth “yaba” has dropped to the lowest level in a decade.

Areport titled “Synthetic Drugs in East and Southeast Asia; Latest Developments and Challenges,” confirms that the volume of synthetic drugs has increased in the past year. “It is hard to imagine that organized crime have again managed to expand the drug market.

Jeremy Douglas, UNODC Representative for Southeast Asia and the Pacific said “While the world has shifted its attention to the COVID-19 production of synthetic drugs continues at record levels in the region.”

The report also highlights that intensified supply has resulted in meth becoming cheaper. Reaching its lowest price points in the last decade in East and Southeast Asia. Decreases in prices of meth pills were also observed in the high profit markets of Australia, New Zealand and the Republic of Korea in 2019.