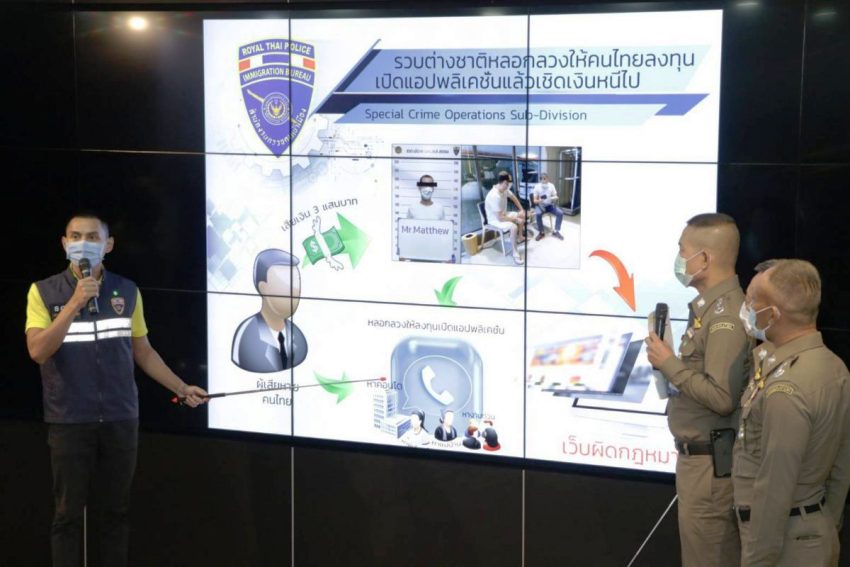 Thailand’s Immigration police have arrested a 37 year-old American man in Bangkok for allegedly stealing Bt300,000 from a Thai investor. The American conned the victim into investing in an application that can search for condominiums, jobs, cleaning services, and other services.

The American man identified only as Mr. Matthew was arrested under a warrant by Immigration officials. They received notification from Lumpini Police Station in Bangkok about a Thai investor who lost money to a foreign man.

The Thai victim was invited to register a company dedicated to creating an application that can help users find condominium rooms, find jobs, find maids, find babysitters, and more.

The victim became interested in the application opportunity and invested 300,000 THB. After the money was given to the American, no company was registered as promised.

The victim asked the suspect multiple times where his money went. The suspect claimed that the 300k had been used to create an adult video website. However no details were given to what the website address was.

Officials collected evidence and submitted it to court for an arrest warrant. Officials then found out from investigation that the suspect was hiding at a hotel in Bangkok. He is now arrested and waiting for prosecution.

Two immigration officers from the Nonthaburi Immigration Office have been suspended after a video exposed  officers asking a foreigner for special money to help speed up the visa process.

Police Colonel Kritsana Pattanacharoen reported a foreigner went to the Nonthaburi Immigration was told that if he wanted the application to be completed fast then it would cost Bt20,000.

Orders have been given to take the matter seriously with justice. If the officers connected to the incident are guilty then they will meet disciplinary actions and legal punishment.

Police General Chakthip Chaijinda the Commissioner-General of the Royal Thai Police has always made sure that police work must be done with fairness to the people according to the law. The people must be able to rely on the police and officials must not act like thieves by using their power in the wrong way.

Meanwhile, Police General Suwat Chaengyodsuk the Deputy Commissioner-General has received orders to enforce strict measures on the Immigration Bureau. Above all to never let the incident repeat itself in the future.

Immigration officers will now have to carefully watch their actions regarding visa applications.

The Benefits of Accepting Bitcoin Payments