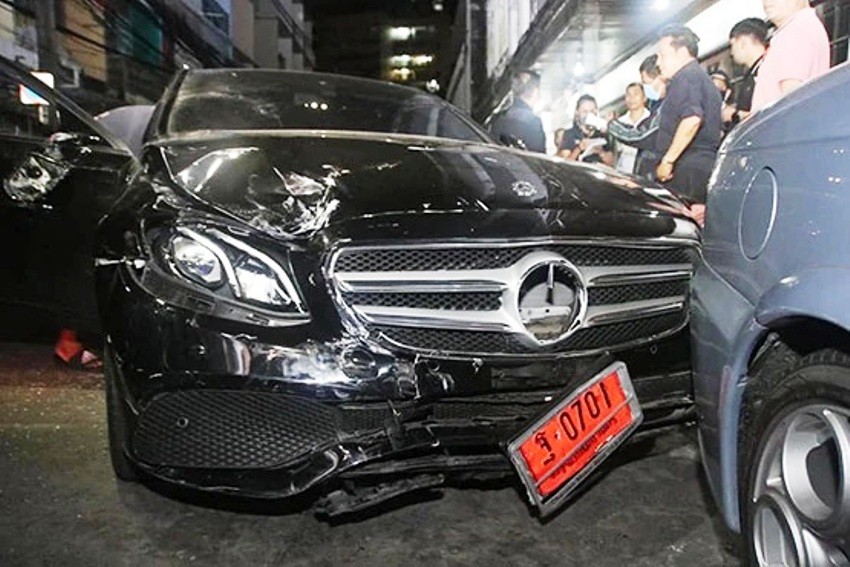 A woman in Bangkok has been arrested for drunk driving after an hour-long police chase, she damaged 6 vehicles during the pursuit. The woman was driving her brand new Mercedes car still with the red license plate. She claims that stress was the main cause for her drunk driving.

Police Major Wachira Asawut from the Bang Sue Police Station in Bangkok received a notification of a hit and run around midnight. A vehicle was damaged and many were injured in front of a market in the Jatujak area of Bangkok.

Not long after the Mercedes E250d with a Bangkok license plate was surrounded by police and good civilians near an apartment. Wichuda 37 years old was sitting in the car wearing a blue floral dress. She was bleeding above her right eyebrow so the rescue team helped make sure she was safe.

According to Thai Media, police chased after the woman for over an hour when they finally arrested her. The drunken woman had damaged 2 cars and 4 motorbikes while trying to elude police. Witnesses stated that the Mercedes started to hit and run on vehicles at about 23.00 on the 11th. The first vehicle was damaged at the Karai intersection in Nonthaburi. The car then drove onto Phaholyothin Road then to Kamphaeng Phet Road, the chase finally ended on Rama VI Road in Bangkok.

During the police chase, rescue teams, and citizens tried to surround her vehicle multiple times. The woman finally stopped after crashing her Mercedes into a parked car.

Police said that woman’s father revealed she was in extreme stress after losing millions in a bad business deal. The woman also appeared visibly drunk and did not make much sense when she spoke.

Police reports show the woman had a blood-alcohol level well above the legal limit. The woman faces charges of drunk driving and trying to elude police. Furthermore she will be liable for all the damages to the 6 vehicles during her drunk driving rampage. The victims will also seek legal action against the woman for damages.