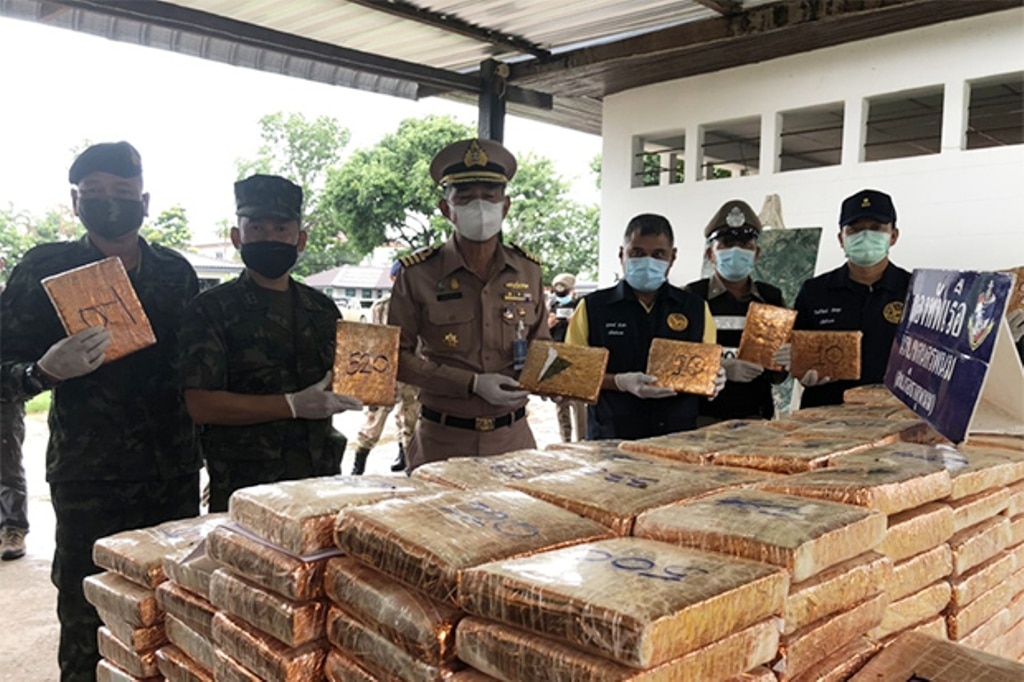 Naval Police have seized 520 kilograms of high grade compressed marijuana and arrested two suspects during a search of their Toyota pickup truck on Sunday night. Police identified the two men in the pickup as Den Sangsongha, 39, and Chumpae Chalue, 35, both from Mukdahan Province.

A search by naval police uncovered 520 bricks of high grade compressed marijuana, weighing about 1kg each in the back of the 1980 Toyota pickup truck.  Capt Nathapat said the approximate street value of marijuanas was about 20,000 baht/kg, worth least 10 million baht.

The two men alleged a Lao man promised to pay them 50,000 baht in return for transporting the marijuana in their pickup to Mukdahan province. The marijuana had been smuggled across the river from Laos, to Nakhon Phanom.

Meanwhile, A Thai migrant smugglers and illegal Myanmar job seekers have been arrested in Kanchanaburi, early on Friday. One smuggler admitted he was being paid 20,000 baht per head to bring workers into the country illegally, in his Toyota pickup truck.

A team of police, soldiers and volunteers stopped and searched a four-door Toyota pickup truck with Kanchanaburi licence plates at the checkpoint at Ranti bridge early on Friday morning after the driver showed signs of nervousness. They found a Myanmar man and boy hiding underneath some goods at the back inside the cabin.

Driver Chanon Charoenhongsa, 20, confessed to having picked them up at Three Pagodas Pass and said he was taking them to Bangkok to work. He admitted he was paid 20,000 baht per head and had done it twice before.

During questioning, the migrants said they had crossed the border on foot into Thailand along a natural path and the pickup truck later arrived to pick them up.

After a health check they were all taken to Sangkhla Buri police station for legal action.