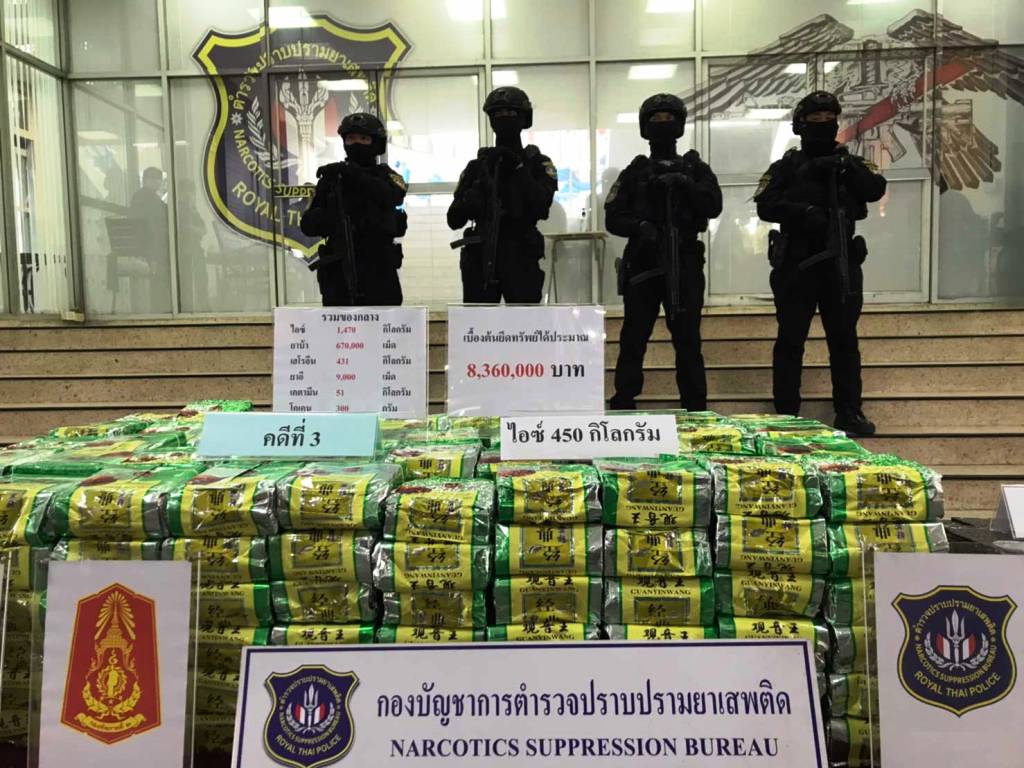 Narcotics suppression police in Thailand have announced a series of major drug busts that resulted in the seizure a Huge cache of drugs. Narcotics police seized 1,470 kilograms of crystal methamphetamine; 670,000 meth pills; 431kg of heroin; and other narcotics and also assets worth over 8 million baht.

The operations were discussed at a media briefing held on Friday by the Narcotics Suppression Bureau (NSB).

In the second case, NSB officers arrested Kesorn Dangkaesee, 47, and seized 500kg of crystal meth hidden in the back of his pickup truck in Tao Ngoi district of Sakon Nakhon province in Thailand.

In the third case, three men were caught with 450kg of crystal methamphetamine, 51kg of ketamine, 590,000 meth pills and 4,000 ecstasy pills hidden in two pickup trucks in Thep Sathit district of Chaiyaphum.

About the Narcotics Suppression Bureau (NSB)

Narcotics Suppression Bureau is the lead agency for counter-narcotics investigations in Thailand. The NSB is under the Crime Suppression Division, one of the bureau’s largest components. Its responsible for conducting most of the technical investigations of criminal offenses throughout the kingdom.

Its Emergency Unit copes with riots and other public disorders, sabotage, counterfeiting, fraud, illegal gambling operations, narcotics trafficking, and the activities of secret societies, and organized criminal associations. The commandant of this division is Police Major General.

Prime Minister Gen Prayut Chan-o-cha delivered his drugs suppression policies to the Office of the Narcotics Control Board (ONCB). A drugs enforcement agency under the Ministry of Justice.