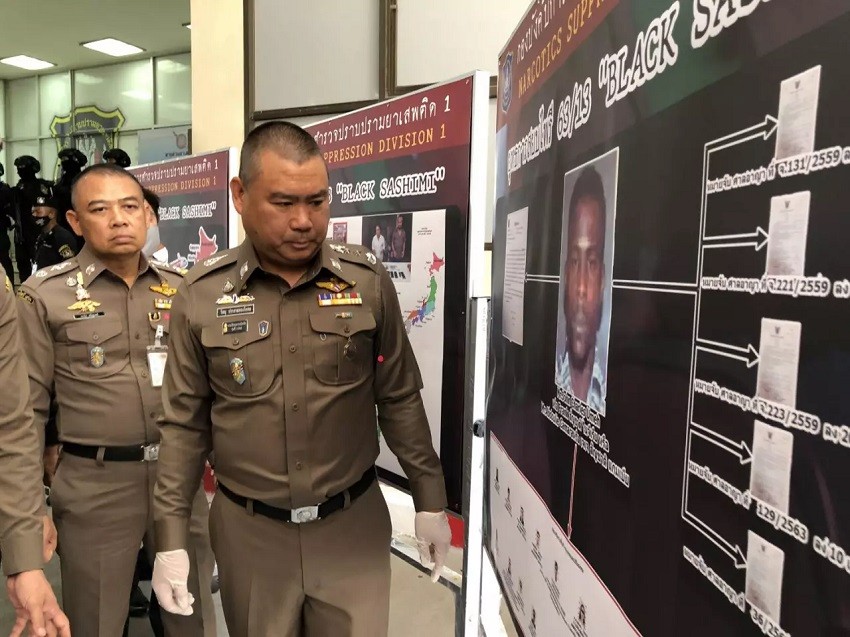 Thailand’s narcotics suppression police have seized a huge amount of drugs and arrested a total 17 people including a Nigerian drug kingpin. In four separate operations police seized 100kg of heroin and 500 kilograms of crystal meth.

The arrests were announced yesterday at a press conference at Thailand’s Narcotics Suppression Bureau.

Lt Gen Chinnapat said the arrests followed weeks of investigation after a tip-off from Japanese police. The Bureau was informed about a drug gang that included several Africans. According to Pol Lt Gen Chinnapat, a Nigerian man identified as John Ume and a Thai man, Chatchawal Rojanaphat, were the gang’s alleged ringleaders. Both men were also arrested in the operation.

In the second case, police arrested two men were apprehended at a checkpoint in Chumphon Province. Narcotics suppression police seized 100kg of heroin from their vehicle.

Police also confiscated 500kg of crystal meth and 2kg of ketamine worth 250 million baht from a house in Samut Prakan. Forty two million baht in assets was also frozen by police in Chiang Rai Province.

Pol Lt Gen Chinnapat said the suspects were part of a major drug ring in Rayong. They smuggled drugs into the country via Nong Khai province. Above all for distribution in Bangkok and surrounding provinces.

In the third case, police arrested two men at a checkpoint in Ayutthaya’s Wang Noi district. Found in their possession were 200kg of compressed marijuana. The suspects were allegedly on their way from Ubon Ratchathani to deliver the drugs to customers in Chon Buri.

Narcotics Suppression police are also looking into a tip-off about a drug exchange at a restaurant central Thailand.

The drug syndicate smuggles drugs into the Isan region, crossing the Laos-Thailand border, then distributes the drugs to Bangkok and other major cities.

The Governments of Thailand and Myanmar have independently stepped up their antinarcotics efforts in the Thai-Burmese border area. Furthermore the center of narcotics trafficking is in the Chiang Rai’s Golden Triangle. The number of seizures of high-purity crystal methamphetamine are surging into northern Thailand. The demand rises and the methods of detection and enforcement also improve. It’s a vicious circle.

Authorities say the number of drug seizures have risen 1000% in just the past 2 years, a stark indication of the growth in industrial-scale production in neighboring Myanmar.

Some 18.4 tonnes of crystal meth or ‘ice’, was seized in Thailand last year, according to preliminary statistics from the Thai Office of the Narcotics Control Board. They know it’s a tiny proportion of the amounts produced and shipped out undetected.

Thai Restaurant Owners Get 1,446 Years in Prison Each for Fraud