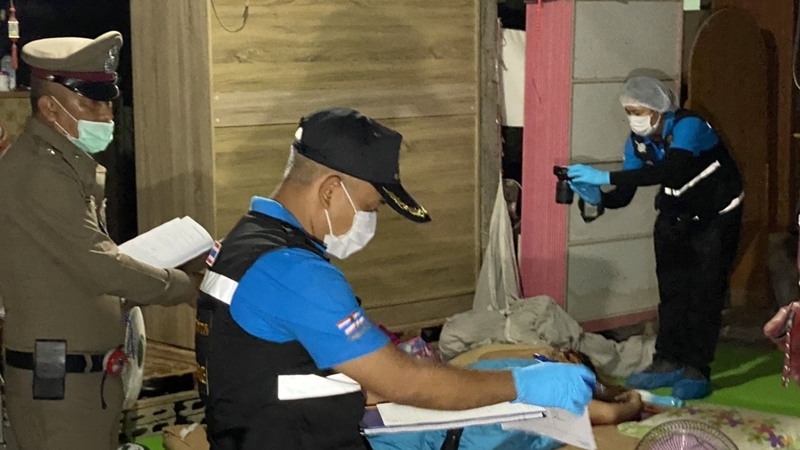 Police have reported that husband has shot his wife in the head as she lay next to their baby after she refused to buy him more alcohol. Yee San Police Station in Samut Songkhram province was notified of the incident before daybreak. The alleged killer was still on the run on Wednesday.

Officers arrived at the scene to discover the body of Yupaporn Poonpipit, 36, lying with a gunshot wound to her head. Her nine-month-old baby boy cried next to her corpse. The dead woman was found with Bt700 still clutched in her hand. The shell from an 11mm-calibre pistol was also found at the scene.

Police learned that the couple were vendors whose business had been suspended during the pandemic crisis. Consequently leaving them without any income. Police named the husband as Winai Maila-or, 35, who was reportedly a heavy drinker of alcohol.

A witness said that he saw Winai argue with Yupaporn after she refused to give money to buy alcohol and then heard gunshots. Neighbours later saw Mr. Winai drove away from the house.

A Sakon Nakhon man was shot dead by police after high drama that involved a car chase and a shootout. The driver of the car reportedly stopped at an intersection and allegedly fired at the officers. The police returned fire and killed the driver in the front seat.

He was later identified as Jaded Somsong, 28, a Sakon Nakhon local.

Officers reportedly found a handgun, 28 bullets, a petrol bomb and a knife in the car.

According to the Nation the deceased was a former employee of a car dealership in Sakon Nakhon.