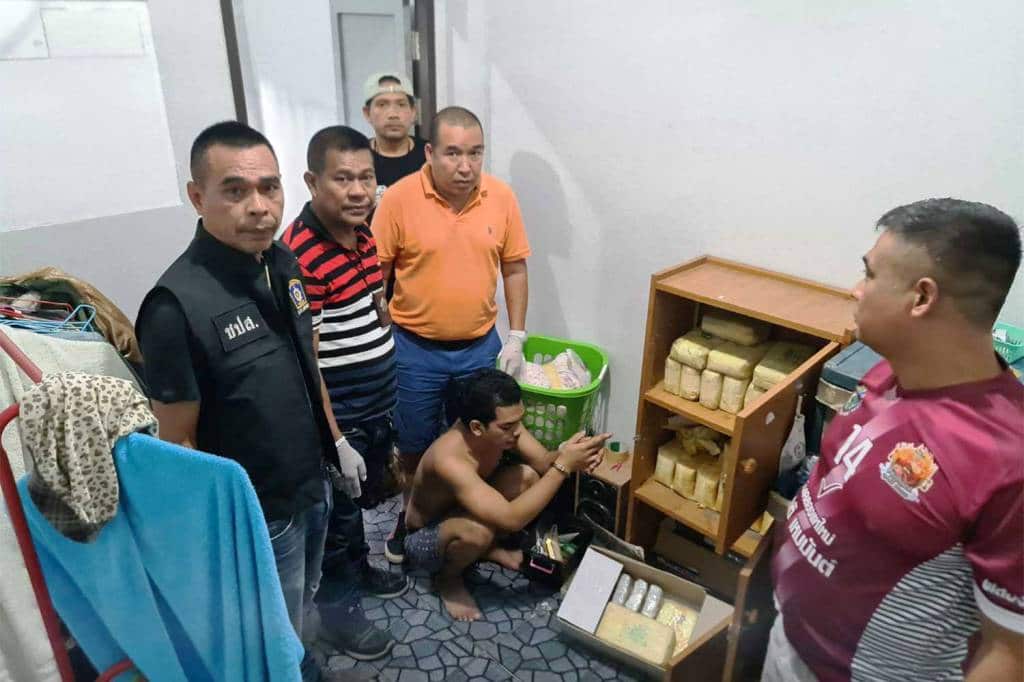 Narcotics suppression police have arrested a man with 27 kilograms of heroin and almost a million meth pills in his possession, in southern Thailand’s Songkhla province.

The action followed a tip-off that a large quantity of drugs had been delivered in an Isuzu pickup for storage at a house rented by Sompong Mugem, 28, at Moo 5 village in tambon Chalung, the Bangkok Post reported.

Police raided the premises on Nov 14 and found 980,000 meth pills and 76 bars of heroin weighing 27kg in total. Mr Sompong was arrested. The pickup was found in front of the house.

They were believed to have been delivered from the northern border provinces for distribution in the South.

Since January this year, Provincial Police Region 9 had seized about 15 million meth pills, 90kg of heroin, 2,651kg of crystal meth and 2,335kg of marijuana and arrested 31,333 suspects, he said.

US$960 Million Worth of  Ketamine Seized

Last week, Narcotics Suppression police have seized 11.5 tonnes of ketamine at a warehouse in central Thailand. The ketamine seized was worth an estimated US$960 million. Narcotics police say contraband ketamine, most of it probably destined for Europe, Japan or Korea.

Montri Yimyaem, head of the Narcotics Suppression bureau, said the size of the haul pointed to a multinational network, and that Thailand would pursue it with other countries and international agencies.

In medicine, ketamine is used as an anaesthetic or an anti-depressant, but as a recreational drug it is used to induce dreamy or trance-like sensations, and sometimes hallucinations.

Investigators found 457 25kg bags of the drug, or 11.4 tonnes in total with market value of 28.7 billion baht, at a warehouse in Chachoengsao province, east of Bangkok.

They had also expanded their investigation after 300kg of ketamine that had come from Thailand was found in Taiwan.

“This discovery is also only the beginning, there will be further investigations to seize ill-gotten gains connected to drug smuggling,” said Minister of Justice Somsak Thepsutin