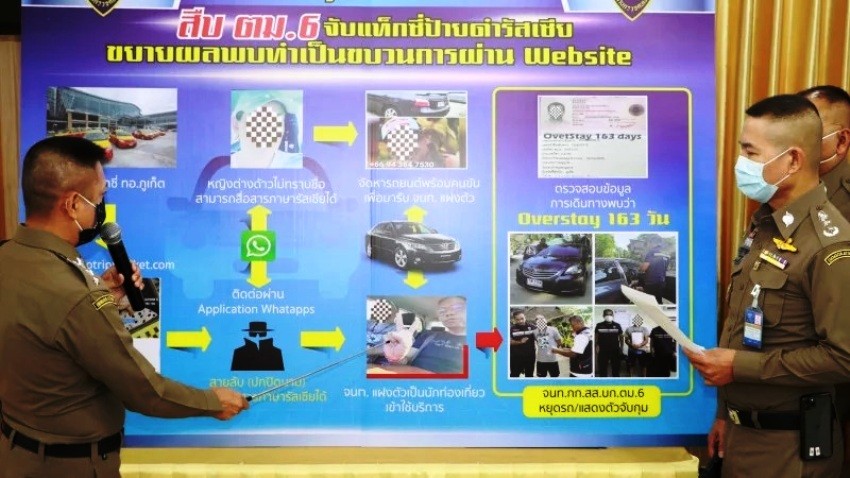 A Russian man who had overstayed his Visa for 163 days has been arrested in Phuket. Immigration officials allege he was acting as an illegal taxi driver, picking up tourists from Phuket International Airport.

The arrest was made after a formal complaint was filed by the Phuket Airport Taxi Association, according to Phuket News. Acting on the complaint at a local police station, Immigration officers booked a trip through a travel website associated with the Russian man.

The website Go Trip Phuket is operated by a group of Russians providing professional drivers to transport Russian tourists.

The Immigration police booked a pickup from the Phuket Airport posing as Russian tourists coming from Malaysia. An officer who could speak Russian made a request through the website’s contact page.

After agreeing a fare of B800, the officer was sent photos of the vehicle and the driver. He was also given a contact phone number for the driver.

When en route, the officer sent a text message letting his fellow officers know to intercept the vehicle and also check the driver’s credentials. The driver was initially unable to present his passport or work permit. Consequently he was taken to the police station for questioning.

He was identified as Russian national Konstantin Morozov. He was charged at the Phuket Police Station for working illegally and for illegally staying his visa.

Consequently it was not reported whether or not Morozov would be deported. Above all due to the COVID-19 coronavirus pandemic hitting Thailand and the world including Russia.

Thailand’s Health Department has reported one more death from covid-19 on Friday, bringing fatalities to five, while 91 new cases were reported, raising the total to 1,136. COVID-19 cases in Phuket have reached 41.

Of the total cases 1034 are hospitalized, including 11 critical patients on respirators. Another 97 have been discharged, said Dr Anupong Suchariyakul, reported. Of all recorded cases, 83% are Thais and 12% are foreigners.