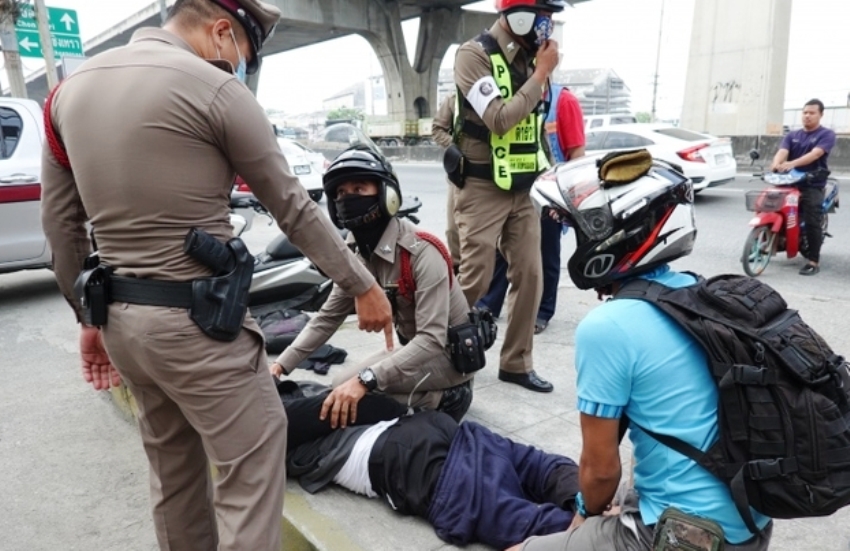 A police sergeant has been arrested for allegedly conspiring to rob the Kasikornbank in Chachoengsao province yesterday. He was arrested in front of the Kasikornbank’s Bangwua branch in Bangpakong district.

Pol General Krisana Pattanacharoen, deputy spokesman of the Royal Thai Police, said on Thursday, officers from Bangpakong Police Station arrested the suspicious-looking man with a firearm in front of Kasikornbank.

The suspect was seen wearing a black cloth mask, black clothes, carrying a backpack. He was standing in front of the bank’s ATM machines. When the police officers questioned him, he said he was an undercover police officer from Special Branch Bureau and tried to flee.

Officers arrested him and found a hand gun in his jacket along with secondary magazine and 40 bullets. He later confessed to conspiring to rob the bank, saying he had Bt400,000 in debt and his wife was out of work. The sergeant was charged with carrying firearms in a public place. Meanwhile officers are further investigate the origin of the firearm and ammunition to see if there are other offences involved.

The Special Brach Bureau will later appoint a committee to consider disciplinary punishment against the sergeant, Pol General Krisana said. The Royal Thai Police said he would face severe consequences for his action.

He said the release of those inmates was based on specific criteria. They must have already served two-thirds of the sentence; and they must have shown excellent behavior in order to be considered for early release; or,they must have served one-third of the term and be elderly; aged 70 or older, or have some illness or disability.

These people must undergo an assessment to evaluate their inability to take care of themselves. Even more there tendency for repeated offences in order to be approved. However, relatives must also sign an agreement to patronize them during the probation process until the end of the sentence. – The Nation

Thai Monk Arrested for Shooting Man in the Groin at Temple