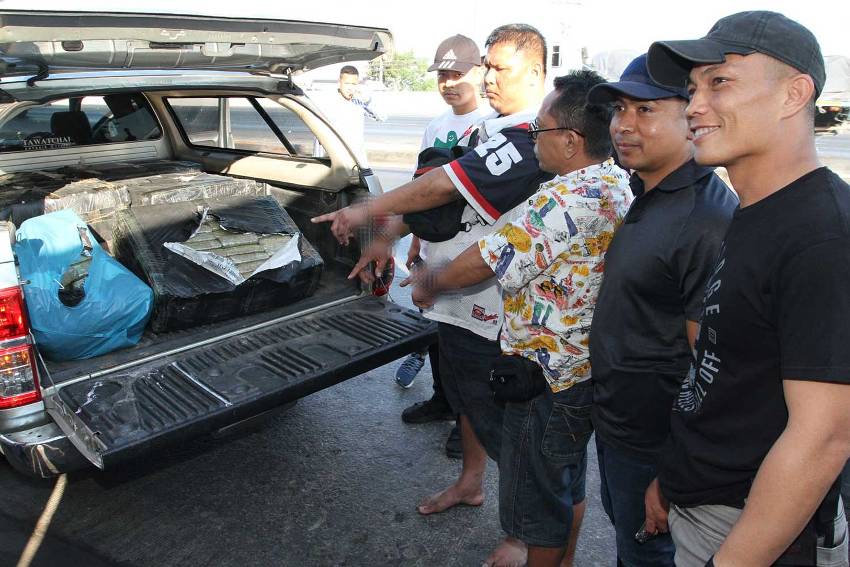 Police in central Thailand have busted two men and seized 400 kilogram of compressed marijuana worth about 6 million baht. The two men are said to be part of a major drug cartel.

Narongsak Kawichai, 47, and Pornchai Saengbunchai, 48, both from Ayutthaya, were apprehended  Ayutthaya  province, Saturday. Pol Maj Gen Worawat Watnakornbancha, chief of the Anti-Trafficking in Persons Division said arrest came after ATPD investigators received information that a large quantities of marijuana were about to be smuggled from Laos.

The drugs were to be kept in storage for delivery to dealers in Suphan Buri, Ayutthaya and nearby provinces, Pol Maj Gen Worawat told the Bangkok Post.

Police posing as customers contacted members of the gang to negotiate the purchase of 400kg of compressed marijuana. The delivery was arranged for a parking lot at the Wang Noi market in Ayutthaya.

Police were dispatched to the area to await the delivery. When they saw two vehicles arrive the officers closed in to make an arrest. However the drivers sped off, prompting the police to give chase.

The officers fired shots at the tires of the vehicles, bringing them to a halt, and arrested the two drivers.

Bullet holes were later noticed in one of the police vehicles but no one had been hurt. Authorities believed at least two more suspects had fired shots at the police vehicle. However they managed to flee before their companions were arrested.

During the interrogation, the pair confessed that they been hired to deliver the drugs and received 150,000 baht each for each delivery. They told investigators they had made at least 10 such deliveries in the past.

A record check showed one of the suspects had been wanted on two arrest warrants. One for murder and illegal possession of firearms in 2009 and another involving drugs in 2010.

The two suspects have been initially charged with illegal possession of Category 5 drugs. They were handed over to narcotics suppression police for further legal action.