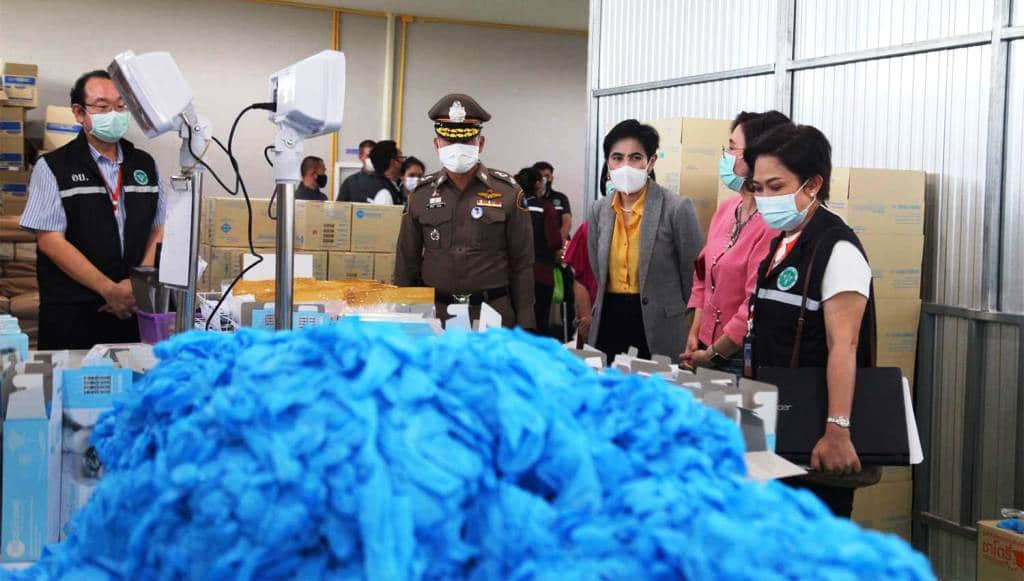 Crime Suppression Division police have seize over 7 million substandard medical gloves during a raid on an illegal factory in central Thailand on Saturday. A Chinese man, claiming to be the owner, and 11 Cambodian migrant workers, all without entry documents, are detained.

A combined task force of Crime Suppression Division police, local police and officials from the Food and Drug Administration and the Thai Industrial Standards Institute raided a building on Saturday.

The raid came after an investigation found the factory had allegedly produced medical gloves without proper authority or inspection.

A Chinese national, identified later as Luk Fei, 42, told officers that he rented the fenced structure modified as a small factory. Eleven Cambodian workers were packing medical gloves inside.

The officers searched the factory and seized 7.61 million rubber gloves in 10,161 boxes for examination whether they met standards or not.

Pol Maj Gen Suwat Saengnum, CSD commander, said the man and his employees were found to have entered the country illegally. All were handed over to immigration police for legal action.

The CSD commander said a new wave of Covid-19 outbreak led to a high demand of medical supplies due to growing worries about the virus infection. Unscrupulous people had seized this opportunity to reap profits.

CSD police had learned that a Chinese investor had rented this building to run a factory producing medical products without permission. The factory also imported substandard gloves from China, the Bangkok Post reported.