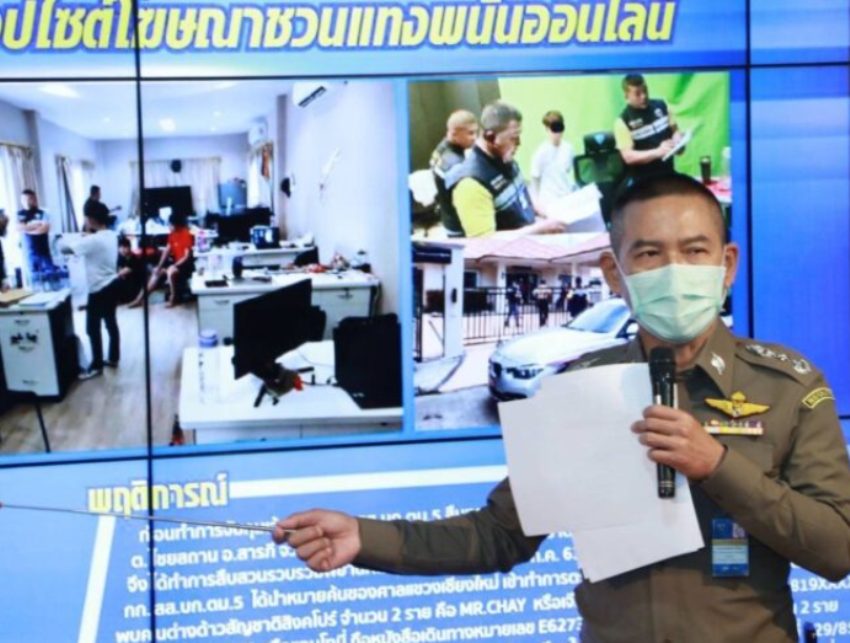 Police in Northern Thailand announced the arrest of 2 men from Singapore and 2 Thai for allegedly running a gambling website in Chiang Mai province. Immigration Police on Wednesday announced the arrest of the Singaporeans at a house in Chiang Mai’s Saraphee district.Immigration Police received a tip-off from local villagers of an illegal online gambling operation. They requested a search warrant from Chiang Mai provincial court to investigate the house.

They also used several mobile phones to contact customers. The 4 suspects were arrested and police seized all the computers and mobile phones as evidence into their investigation.

Police are investigating the website to track the owner as well as the money trail for clues of money laundering.

The Royal Thai Police have also been on a crack down on gambling, on site and online.

Police said that last year, it has shut down more than 750 online gambling sites, and illegal transactions made at 670 million U.S. dollars.

Gambling operation in Thailand is regulated by the Gambling Act of B.E.2478, which prohibits all Thai citizens from playing any casino or betting games, betting on animal fights, dice games, slot machines, roulette, and other card games.

All over the country gambling can be found. In major cities casinos exist in the basement of buildings and rented upscale apartments. In villages casinos are often at peoples homes. Some are just a mat spread out to play dice or Card games. Furthermore sports betting with bookies, or numbers draws with non official sources are also common.

Gambling on the Rise in Thailand

A Centre for Gambling Studies (CGS) survey has found that more than 700,000 people who gambled this year were first-time punters, with the youngest being only seven years old.

CGS director Nualnoi Trirat said the centre has been studying the gambling habits of Thais across the country since 2017.

According to Ms Nualnoi, the study found that as of this month, 30.42 million Thais, equivalent to 57% of the country’s population, engaged in some sort of gambling. This was an increase of 1.4 million gamblers since the the study began in 2017.

“Our study found that more than 700,000 people who gambled this year were first-time gamblers and the youngest of them was only seven years old,” she said.