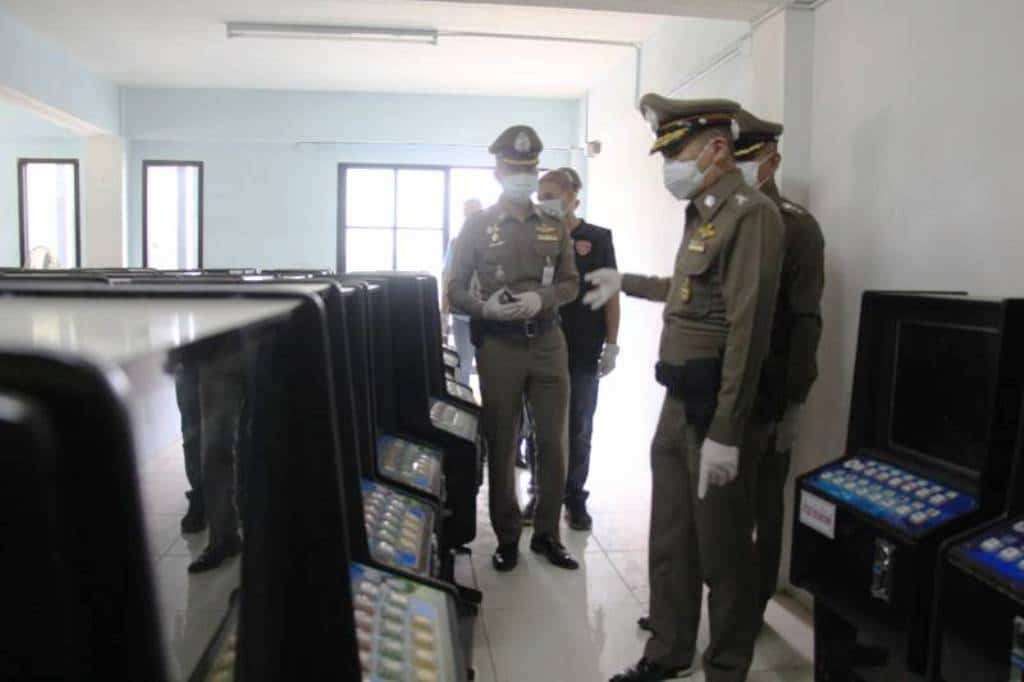 Based on a tip off on the Chonburi Province’s “Report Illegal Gambling” Official Line Channel, 161 slot machines have been seized that were hidden in a warehouse near Pattaya, Thailand.

Located close to schools and local communities, 101 slot machines were found in a single room on the commercial premises, and 60 more were found in another. The cabinets are believed to have been smuggled in illegally and some appear to have been recently used. The majority of the machines are functioning and have been set up ready to be played when switched on.

On the same premises there were also rooms for exchanging coins, maintenance of the machines, and evidence that people had been recently living there. An automatic scooter, mattresses, clothing, a fan, and several other appliances were all seized along with the slot machines. Nobody was found on the premises when the raid took place on Thursday, in Pattaya.

The investigation is ongoing and the Royal Police are still searching for the responsible parties. Details of the origins of the machines also still remain unknown. Thai translator Hazel Rawang who translated the original Police Report from Thai to English, believes that gambling whistle blowing in Thailand is on the increase due to community fears of the spread of coronavirus.

“There’s been a notable increase in gambling related arrests recently, and this coincides with local communities’ concern about the risk of having many people gathering together at once.” She said. Just a few days ago an illegal casino in Chiang Mai was discovered and 34 gamblers were arrested. “These types of busts are becoming more commonplace as scared locals alert the Police of such illegal activities.”

Crackdowns on gambling dens may just push people to gamble online, which doesn’t really solve the problem. Sites that offer online betting services such as LSM99, have seen a noticeable increase in sign-ups since the beginning of the coronavirus pandemic. This trend is likely to continue as the Royal Police continue their crusade against the perpetrators flouting with the law.

It was only last week however, that Prime Minister Prayut-o-cha stated that he is open to discussion about the legalization of gambling in Thailand. The problem appears to be far more endemic than most people realize, and it doesn’t appear that the outright ban on gambling is having the desired effect.