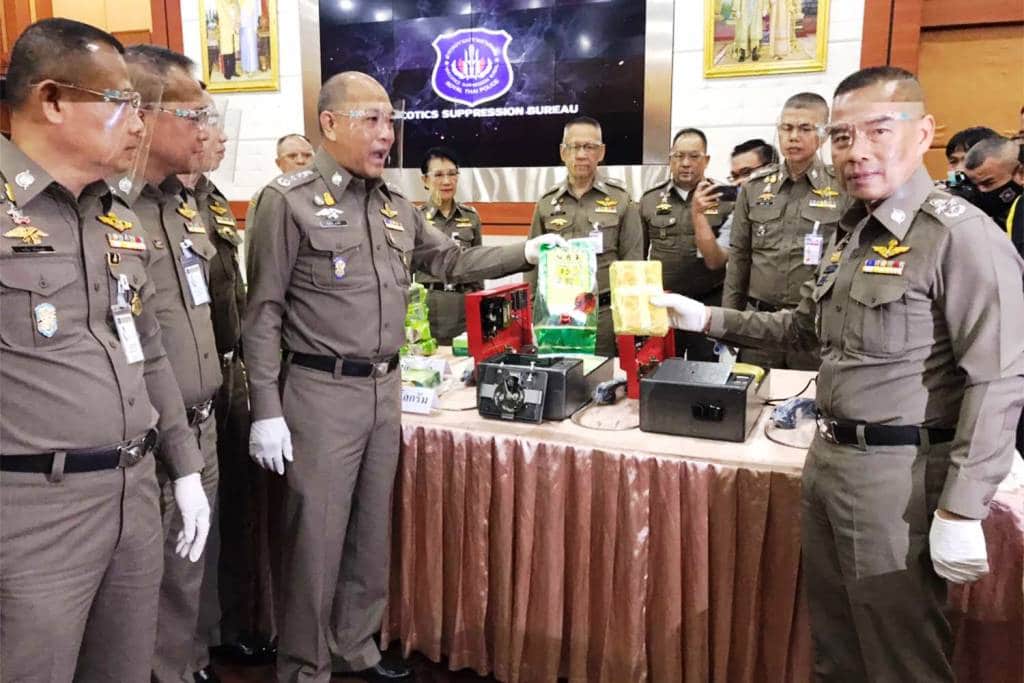 Narcotics Suppression police have seized 500 Kilograms of Crystal Meth and 1.2 Million meth pills in northeastern Thailand. The drugs were hidden in Telephone booth phone call boxes and were destined for the south of Thailand.

They were among 11 suspects arrested in six cases in which a total of 500 kilograms of crystal meth, 1.79 million meth pills, 1.5kg of cocaine, 1kg of ketamine and 200 ecstasy pills were seized, Pol Gen Manu Mekmok, deputy national police chief said. Suspects arrested during a police raid

He said the drug trafficking gang had previously used many other ploys to hide drugs. Concealing drugs in car engines; exercise equipment; loud speakers and also other goods shipped to the Southern Thailand.

Narcotics Suppression police investigators had closely monitored the gang’s operations and learned they planned to hide a major shipment inside phone booth call boxes. They were to be trucked as commercial freight from the Northeast to Southern Thailand via the Central Plains. Since the tightening of the borders in the north smuggling narcotics through the Northeast and West of Thailand has increased in frequency and volume.

The smuggling of ecstasy and its precursors from Europe via international courier services is also being found. Most of those arrested are youthful offenders. Their M.O. is to smuggle the primary precursors and make club drugs here, to be sold to teenagers hosting parties at private residence in Bangkok and tourist destinations.