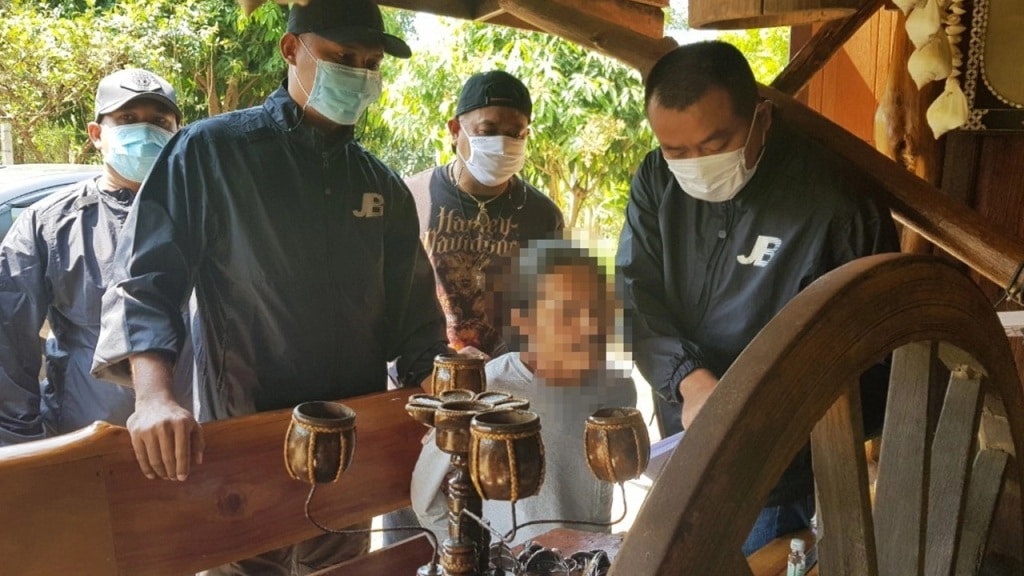 A suspect in two murder cases has been arrested only 16 days before the statute of limitations in the cases expired, Crime Suppression Division deputy commander Suwat Saengnoom said on Monday.

CSD police with an arrest warrant issued by a Court in Nakhon Si Thammarat, Thailand on Sunday arrested Praiwit aka Nathapong Meesuan, 47, at a house in Chachoengsao.

He faces charges of murder and attempted murder. The CSD deputy commander said the offences occurred on March 9, 2001.

A man named Jaroon and two friends were at a karaoke shop at Moo 4 village in tambon Krung Yan of Thung Yai district, Nakhon Si Thammarat. They became drunk and rowdy, throwing glasses and bottles and annoying other customers. This led to a heated argument between Jaroon and Mr Praiwit, who was also there with two friends.

Mr Praiwit went to the back of the shop and returned with a shotgun. He shot Jaroon, who fell to the floor. Mr Praiwit dragged Jaroon out to the front of the shop and allegedly stabbed and slashed him repeatedly in the face and the neck with a knife. Jaroon died on the spot.

He also allegedly fired a shot at Jaroon’s friends, seriously wounding one of them. Mr Praiwit and his friends fled and went into hiding, separately in other provinces. Shortly after, his two friends were arrested. Mr Praiwit had been on the run since. With the 20-year statute of limitations in this case due to expire on March 9, Jaroon’s relatives filed a complaint with the CSD, seeking justice. Following an investigation, CSD police arrested Mr Praiwit in Thailand’s Chachoengsao province on Sunday.

Under questioning, Mr Praiwit admitted to shooting Jaroon with the shotgun, but he claimed it was not a serious wound, Pol Maj Gen Suwat said.

The suspect said Jaroon’s death was more likely caused by one of his friends who was arrested earlier. That man had attacked Jaroon with the knife, he said. He had not.

Mr Praiwit said when he fled he stayed at the house of a relative of his mother in Hua Sai district, Nakhon Si Thammarat, Thailand for about one month. He changed his name to Nathapong in the hope he could escape arrest.

As the statute of limitations was nearing expiry, he went to live with a close friend in Sanam Chai Khet district, Chachoengsao province, and worked at an orchard, where he was eventually arrested.

Mr Praiwit was handed over to Thung Yai police for further proceedings.