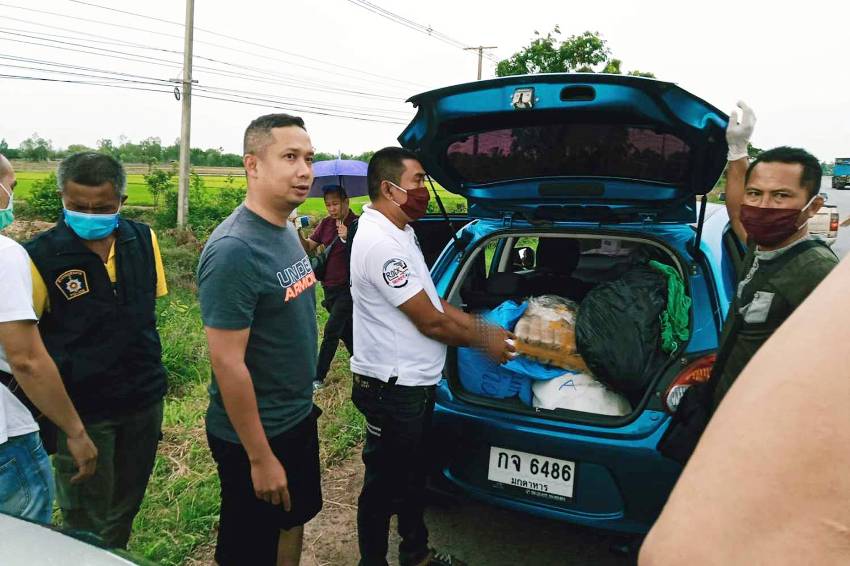 One team spotted the driver of a Mitsubishi slowing down about 10 km from downtown Muang district of Kalasin. The driver then threw a black plastic bag into bushes on the roadside, and drove away.

Methamphetamine also worth about 18 million baht

The bag was found to contain 2,000 meth pills. The officers alerted another team to intercept the vehicle. Upon intercepting his vehicle police discovered several fertiliser bags containing a large amount of methamphetamine.

A total of 610,000 meth pills, including the 2,000 found on the roadside in Kalasin, were seized. The seized methamphetamine was worth about 18 million baht, he said.

Upon interrogation, Mr Somphan allegedly admitted he had collected the drugs at Wat Phum Manorom about 6.30am. He was to deliver the methamphetamine to four locations; Roi Et, Kalasin, Maha Sarakham and Khon Kaen provinces.

According to Mr Somphan a Lao drug trader had offered him 140,000 baht for the job. Furthermore he was to get the money after completing the deliveries.

According to the Bangkok Post, police also have extended their investigation after information was divulged by Mr Somphan.

The regional methamphetamine epidemic has worsened in Thailand as it now costs as little as 40 baht to buy a ya ba pill. That’s down from 200-300 baht a few years ago,