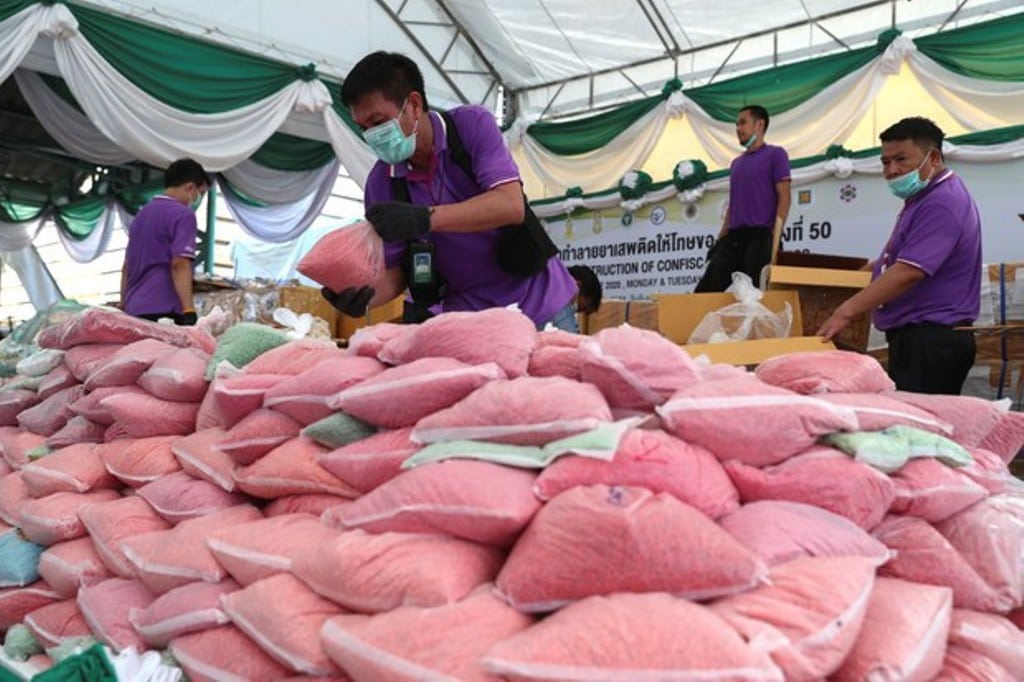 Seizures of meth set a record in 2020, increasing by nearly 20 percent from the previous year, the U.N. Office on Drugs and Crime (UNODC) reported. Nearly three-quarters of the drugs seized were confiscated in the Lower Mekong countries – Thailand, Myanmar, Laos, Cambodia and Vietnam – according to the agency.

“Despite COVID-19 and its associated restrictions on trade and people’s movements, there has been an overall sustained expansion of the methamphetamine market in East and Southeast Asia,” the 121-page report by UNODC said.

“This is in part due to both the mobility of synthetic drug production as well as the continuous supply of precursors and chemicals to manufacturing sites of methamphetamine in the region.”

Precursors are chemicals used in the illegal manufacture of narcotic drugs, and which also have legitimate commercial uses.

The growth in the meth trade is being driven partly by an “evolution in the range of chemicals” that criminal rings use to make the drug, according to the report, which examines the latest developments and challenges in the regional synthetic drug market.

Demand for methamphetamine in Southeast Asia appears to have grown in parallel with increases in its availability, said the report.

“Despite record quantities seized in 2020, a large number of countries in the region have reported further decreases in prices of methamphetamine, which indicates that the market continues to be driven by supply,” the report said.

It pointed to a drop in wholesale and street-level prices for meth in Thailand, Malaysia and Cambodia.

In spite of pandemic-related measures restricting the mobility of trade and transportation, countries across the region confiscated at least 169 tons of methamphetamine in 2020 – a 19 percent increase from the 142 tons seized in 2019, UNODC reported.

Although Myanmar’s Shan state remains the region’s main source of production for meth, “there are growing signs that Cambodia is being increasingly targeted for large-scale illicit methamphetamine manufacture,” the report said.

Transit and trafficking of meth

Meanwhile, Laos, which borders Myanmar, “has been increasingly targeted for transit and trafficking of methamphetamine and its related chemicals,” the report noted, citing sharp increases in seizures of meth along the Lao-Thai border.

“Organized crime groups have been able to continue the expansion of the regional synthetic drug trade – in particular in the upper Mekong and Shan state of Myanmar – by maintaining a steady supply of chemicals into production areas despite border restrictions that have impacted legitimate cross-border trade,” Jeremy Douglas, UNODC’s Bangkok-based representative for Southeast Asia and the Pacific, said in a statement accompanying the report’s release.

“While the pandemic has caused the global economy to slow down, criminal syndicates that dominate the region have quickly adapted and capitalized. They have continued to aggressively push supply in a conscious effort to build the market and demand.”

According to a senior Thai counter-narcotics police official who attended the report’s launch in Bangkok, drug traffickers are increasingly resorting to smuggling drugs via sea routes.

“Methamphetamine and crystal meth are still widely smuggled across the region via land, airports and sea routes, and recently we found the rise of maritime trafficking, especially via Thailand, to third countries,” Police Lt. Col. Paisit Sangkahapong, deputy secretary-general of the Office of the Narcotics Control Board, told BenarNews, an RFA-affiliated online news service.

“Apart from that, drug syndicates, drug dealers, exploited new techniques by using online methods to trade their drugs or using various social media platforms to conduct their activities. This is something we are monitoring.”