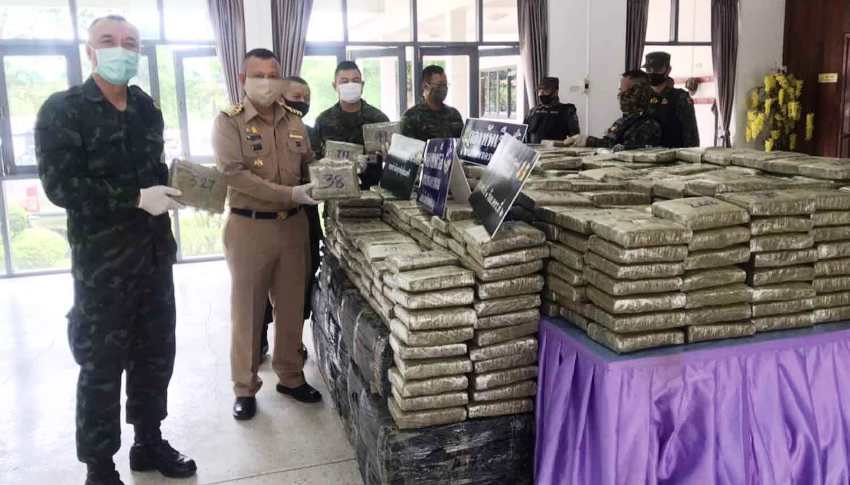 A Mekong River security patrol has recovered about 1,000 kilograms of compressed marijuana found in fertiliser sacks on the bank of the Mekong. The Marijuana was discovered in Bung Kan province in northeastern Thailand.

According to the river patrol a long-tailed boat with four to five men on board was spotted pulling into the river bank near Ban Dong Thon in Bung Kan’s Bung Khong Long district. The men began unloading sacks onto the bank.

When the patrol approached and demanded they stop for a search, the men fled in the boat. Also leaving 25 sacks behind.

The sacks contained a total of 1,000 slabs of dried, compressed ganja, each weighing about one kilo each.

Furthermore, Rear Admiral Sompong said more than 3 tons of dried marijuana has been seized in Nakhon Phanom in February.

Thailand is on track to be the main competitor in the Asian medical marijuana and hemp markets. Even more the full commercialization of the sector and liberal access for private businesses is not likely to be implemented before 2024, according to a new report.

Thailand’s medical cannabis market has been characterized by high potential. Having fast regulatory developments and a considerable degree of protectionism. According to the analysis by Vienna-based Cannabis Catalysts.

“Yet, for businesses interested in the Asian cannabis market, there are also sound arguments to expand to Thailand.” the report notes. By 2024, Cannabis Catalysts estimates that Thailand’s entire medical cannabis market could be worth $46 million to $312 million. This also depends on a wide range of factors.

Among the report’s estimates for 2024:

The report comes with a dose of sobriety, however, noting that the broader industry is currently a vision and only a few dozen patients are participating.

“While the basic framework of the cannabis legislation was published soon after the resolution, there is a lack of regulatory specifications up until now. Many aspects of the legal procedures are just not defined yet,” the report points out.