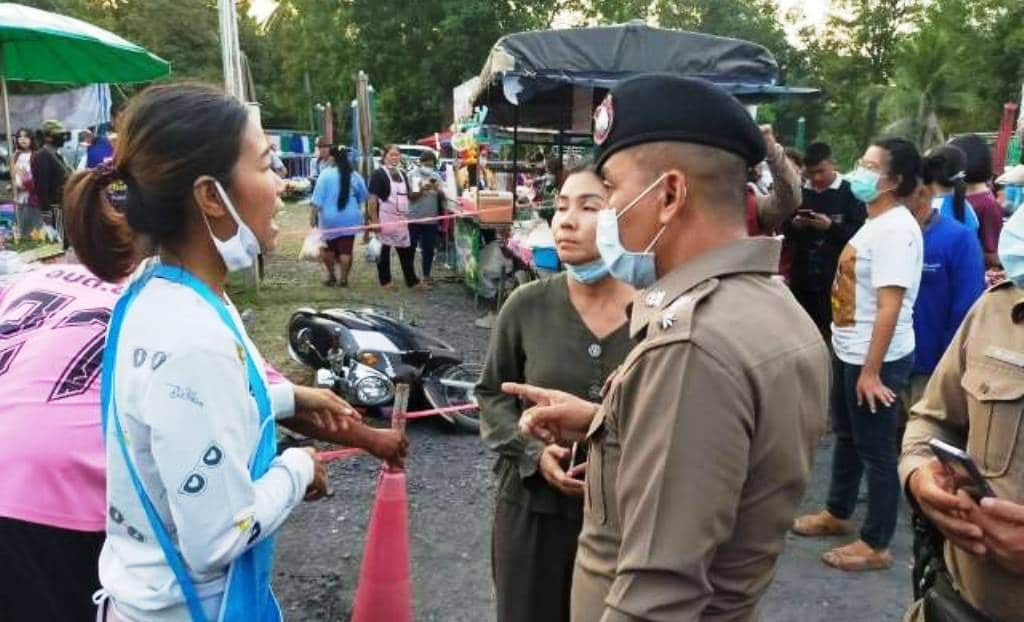 Police in Northern Thailand’s Phitsanulok province have reported that two persons have been shot at a local flea market in Noen Maprang district. Locals and shop owners attended to the victims until the police arrived.

Duangchan Klinkratok, 36, was shot on her right rib and the back of her neck. Her father, Prachub KlinKratok, 60, was shot on his arm and left collarbone. They were admitted to Noen Maprang Hospital, Thai media reported.

The shooter was identified by witnesses as Suriyan Rodbanyang, 40, Duangchan’s ex-husband. He reportedly escaped the scene on his motorcycle after committing the shooting.

Suttha Klinkratok, a relative of the injured persons, told police that Duangchan owned a noodle shop in this market, and her father was in charge of bringing the food to his daughter.

Late in the afternoon, Suriyan rode his motorcycle to Duangchan’s stall and had a conversation with her. After that, he shot Duangchan and when the father tried to protect her, he was injured too.

Police added that Suriyan had been released from prison two years ago, and they believed that he wanted to reconcile with Duangchan. However, Duangchan refused to reconcile, so he shot her in anger.

Man Executed in Front of Wife and Baby

Meanwhile, a 27-year-old man was gunned down in front of his wife and baby at a Bangkok noodle shop in cities Yai district on Friday. At 9pm Bangkok Police were alerted of a shooting at a noodle shop on Jaran Sanitwong Road, Wat Tha Phra subdistrict, in Bangkok’s Yai district.

At the scene they found the body of Athit (last name withheld) with four gunshot wounds on his chest.

The shop owner, Jaran, 59, mother-in-law of the deceased, said that Athit, worked as an engineer at a construction company, but was helping in the shop with her husband, her daughter, and their one-month-old child, when a motorcycle with two riders parked in front of the shop.

A man around 160 centimeters tall, who was riding pillion, entered the noodle shop and shot Athit multiple times before fleeing on the motorcycle and riding towards the Tha Phra intersection,” she said.

Police are gathering evidence and reviewing CCTV footage along the route where the suspects escaped.

“This looks like a planned assassination, as the gunman pinpointed the victim with no collateral damage,” said Pol Colonel Preecha Phengphao. “We are also looking into the victim’s background to see if he has any enemies or conflict that could have motivated the attack.”

Fruit Vendor Gunned Down in Bangkok

On Thursday, a man was shot dead near a restaurant’s parking lot in the capital’s Bangkok Noi district. Police were notified of the shooting near a Por Kung Pow branch on Boromaratchonnee Road at 2am. They arrived with a doctor from Siriraj Hospital.
The victim, identified as fruit vendor Damrong Taweekhet, 49, had two gunshot wounds in his chest. A witness told police that he was talking to his friends when a motorbike rode up to park nearby Damrong. The motorbike rider and Damrong were seen arguing before the rider pulled out a gun and shot at least four times, The Nation reports.
Further investigation shows that the shooter was about 30 years old and was Damrong’s friend. The two men had previously argued inside the restaurant. The shooter stormed out and returned later, when the eatery was closing.
Police say the motorbike was seen heading down Boromratchonnee Road after the shooting.
Related Topics:bangkoknoodle shopnoodle shop near mepoliceshopshotthailandThailand News
Up Next