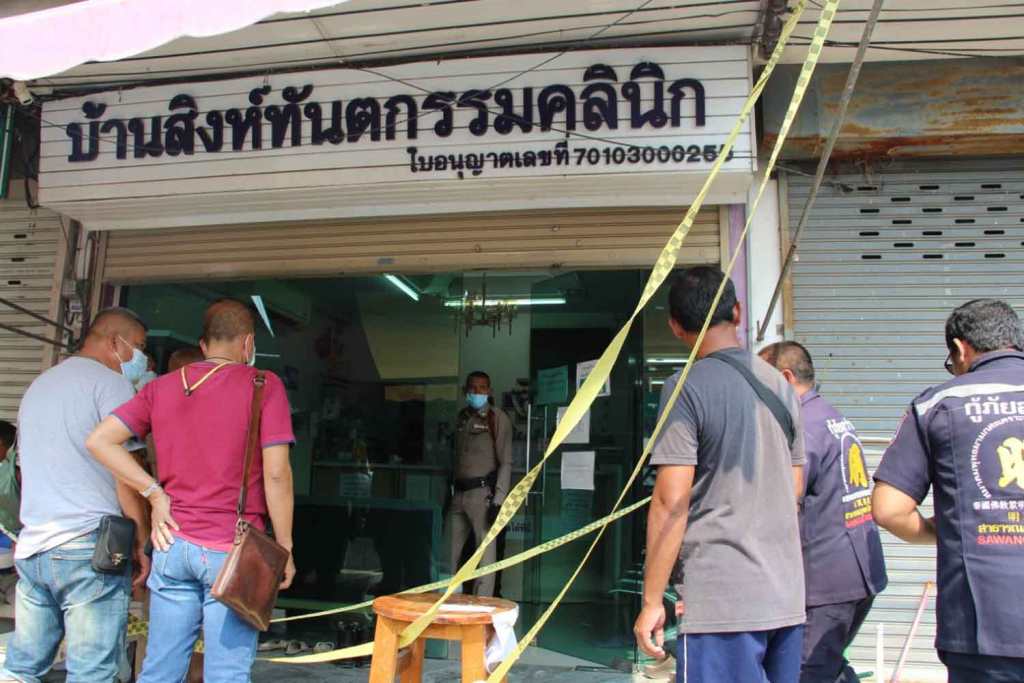 A man consumed with jealousy has been arrested after stabbing a woman to death at a dental clinic in central Thailand on Tuesday morning. The woman was found in a pool of blood by police and an attending doctor.

Police in central Thailand’s Ratchaburi province were called to the Ban Sing Tantakam Dental Clinic about 10am. A doctor from Photharam Hospital also accompanied them.

Upon their arrival they found Ms Kaewmorakot Netniam, 38, lying dead in a pool of blood on the second floor. She had several stab wounds to her body.

Mr Ratchasak Choenphueng, 34, was waiting to surrender to police with a 10-centimetre-long knife in one hand.

The suspect’s aunt, Mrs Kannika Ketram, 62, told police Mr Ratchasak met Ms Kaewmorakot, a widow with three children, on Facebook. They became lovers and had been in a relationship for about a year.

During this time Mr Ratchasak found Ms Kaewmorakot a job as a dentist’s assistant at the clinic.

Mrs Kannika said she recently learned that the couple had quarrelled and had separated about a week ago.

On Tuesday, Mr Ratchasak went to see her at the clinic. After a brief conversation, he allegedly stabbed her many times with the knife. She died on the spot. Police say jealousy was a motivating factor in the murder.

Mr Ratchasak was charged with premeditated murder and carrying a weapon in public without proper reason.

Acts of revenge are common with matters of the heart in Thailand. Both Thai women and Thai men have been known to become infantile in retaliation to a loved one who loses interest in them.

Thais can be just as ruthless, perhaps even more so, when they feel slighted, cheated or hard done by, by their own.

If a Thai feels slighted, or even merely envious or jealous they may feel an almost involuntary need to rectify things. If something triggers a Thai to become genuinely aggrieved, there may be no limit to how they respond.

When they feel slighted, or that they have suffered, been disrespected, cheated or hard done by in some way, they may have an overwhelming urge to get even. Merely witnessing what they perceive as uncouth, rude or disrespectful outsiders behaving badly in their backyard, perhaps enjoying things that they can only dream about, can bring on feelings of discontent or anger. And if it is rubbed in their face, they might feel the need to do something about it, perhaps even administer some sort of revenge.

Revenge can take a number of forms from physical violence, to notifying the authorities of alleged improprieties to using their influence to see that the person they despise is somehow disadvantaged. The higher their social status, the more finesse.

US$39 Million in Assets Seized from Two Illegal Gambling Operators