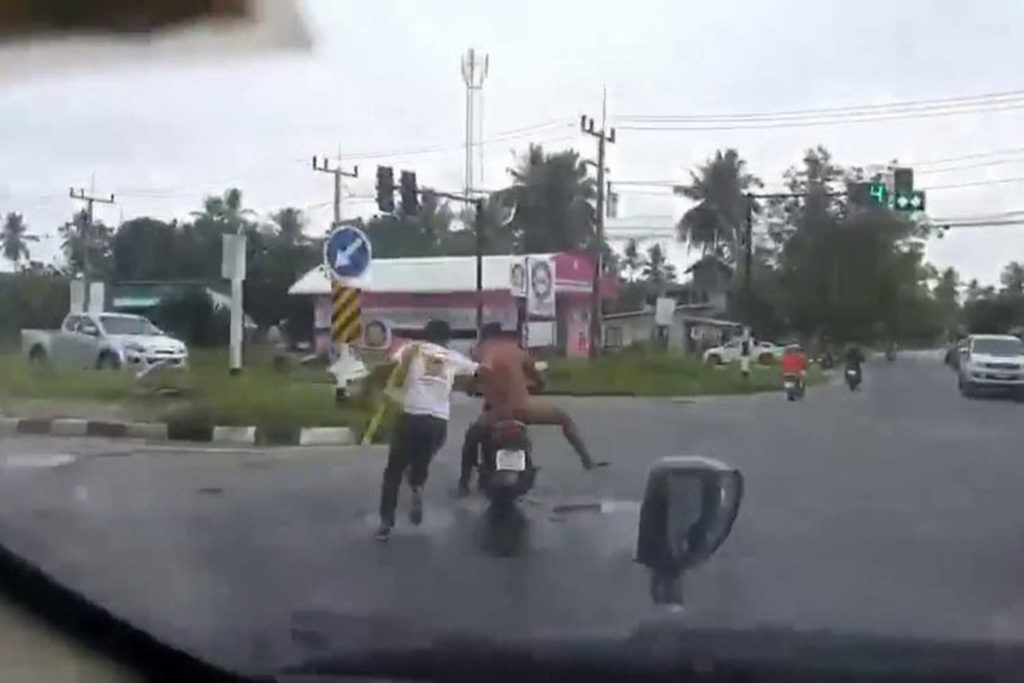 A man in southern Thailand has been arrested after seizing a motorcycle from a woman at an intersection completely naked. He then rode off with the motorcycle was later captured by a nearby market – still naked.

Sunday’s incident occurred in full view of pedestrians and motorists. It was videoed and posted on Facebook and, unsurprisingly, went viral.

The video clip, lasting 49 seconds, showed a man aged around 30 sitting naked on the road divider at an intersection.  He walks directly towards a woman motorcyclist who stopped at the red light in southern Thailand.


As the man approached the horrified woman abandoned her motorcycle and ran away.

The naked man jumped onto her motorcycle and prepares to drive off. Suddenly another man (with clothes) tried to stop the naked man from leaving.  The naked man kicked the other man then rode off on the motorcycle.

Earlier on Sunday, rescue workers saw the man sleeping alongside another road in Nakhon Si Thammarat. They bundled him into their vehicle intending to take him to Tha Sala Hospital.

But when they stopped at an intersection the man woke up. He became very agitated and jumped from the vehicle. He sat down on the road divider – just then the unfortunate woman road up at the red light on her motorcycle.

Local police assigned to the case said they arrested the man at a local market. He was taken to Tha Sala Hospital in southern Thailand for a psychiatric evaluation.