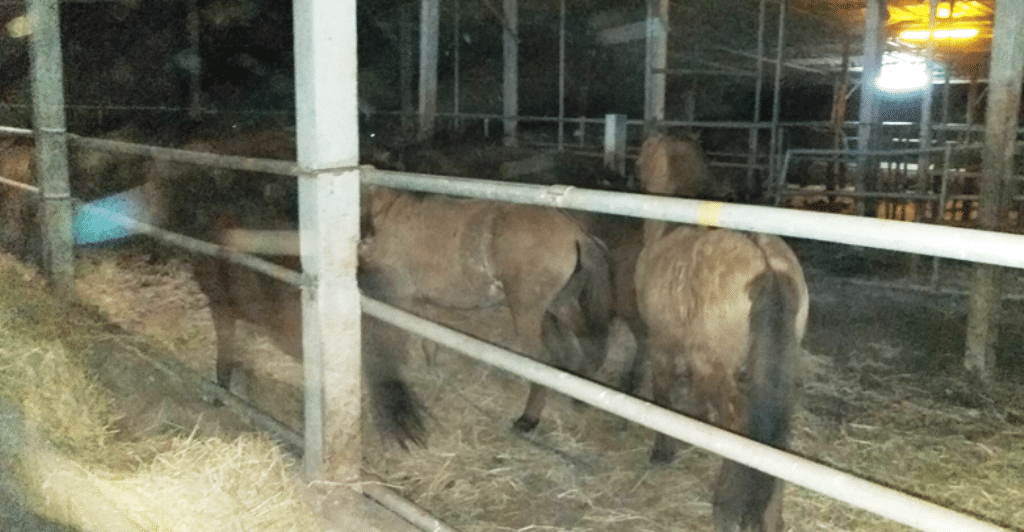 Police in northeastern Thailand have arrested a 44 year-old man for selling horses to an illegal slaughter house in Nakhon Ratchasima Province. He has been charged with not registering animals with the local veterinarian, selling animals without permission, and other related charges.

His arrest comes after the Watchdog Thailand Foundation notified officials about horses that have been sent to an illegal slaughterhouse in Nakhon Ratchasima Province. An investigation was started leading to the arrest and the discovery of horses waiting to be slaughtered.

Officials also discovered a trader was moving horses from a horse farm in Kamsagasaeng District in Nakhon Ratchasima to a farm located right next to a slaughterhouse in Wang Yai District, Khon Kaen. Police inspected the farm and found 44 horses. All of which had not been registered with the local veterinarian.

Horse meat to Vietnam and China

The farm owner was also arrested and admitted that he purchased all the horses to sell their meat. If officials hadn’t found them the plan was to slaughter the horses and sell their meat and parts. Their meat was being sold for 100 THB per kilogram to a meat buyer who moves meat to Vietnam and China.

The buyer smuggled the horse meat through natural passageways.

The 44 year-old man is now in detention awaiting prosecution. Officials will also be continuing the investigation to find related persons in the horse meat trade. Horse meat looks similar to beef but is usually darker and has yellow fat.

The Animal Welfare Institute states that horse meat in the U.S is unfit for human consumption. Above all due to the uncontrolled dangerous drugs. Horses are given hundreds of drugs before they are slaughtered. The chemicals are given constantly throughout these horses’ lives.

Most of these substances are determined not for use in animals intended to be eaten by humans.