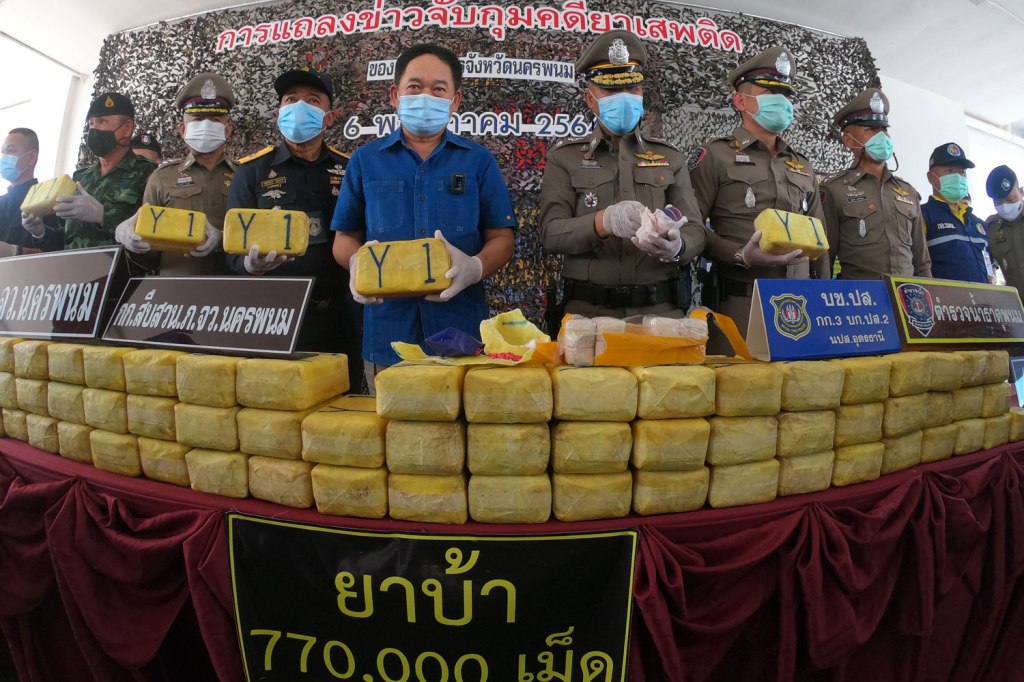 Nakhon Phanom Police said Mr Nirut and Mr Chakrit were detained first, after they searched a Toyota Fortuner with Bangkok licence plates parked on a road in tambon That Phanom.

Another team from the joint task force later arrested the two other suspects, Mr Suparb and Mr Chalerm, after pulling over  a Toyota Altis with Mukdahan licence plates. The car was driven by Mr Suparb.

He and Mr Chalerm were supposed to warn the other two if they spotted police checkpoints along the smuggling route.

Drugs coming across the Mekong

During questioning, all suspects alleged confessed to having been hired for 100,000 baht by a Thai man to pick up the drugs, which had been smuggled from Laos by long-tail boat across the Mekong River.

They allegedly admitted doing the same job several times in the past, delivering the drugs to inner provinces. Over the past two months, about 5 million meth pills smuggled into Nakhon Phanom province have been seized, police said.

Twenty five sack containing 5 million meth pills was hidden under agricultural waste in the back of their pickup truck. The 3 men were captured after they tried to pass through the Tor 118 Road checkpoint on the Chiang Rai – Chiang Mai highway.

The pickup truck was intercepted at the Tha Kot checkpoint, Tha Kor sub-district, Mae Suai district in Chiang Rai province.  The seizure comes after police received a tip-off from a suspect arrested in a previous drug seizure in Chiang Rai.