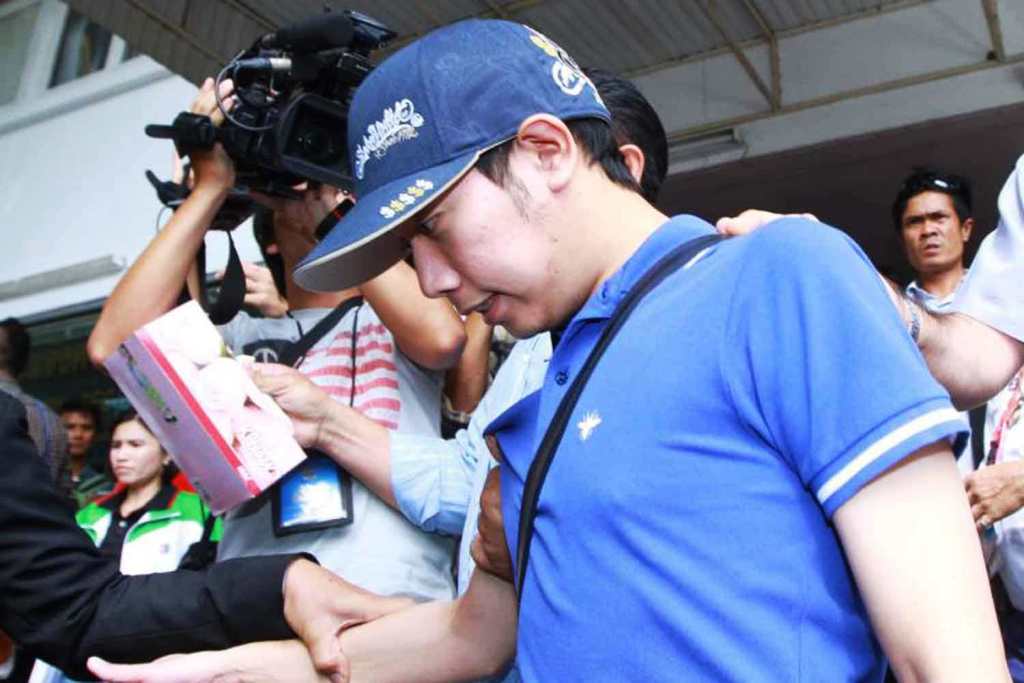 A panel investigating the failed hit-and-run case against Red Bull heir Vorayuth Yoovidhya has found evidence of conspiracy. The panel has recommended a new investigation and charges against the officials involved.

The report also raises the possibility of an “intention to kill” in Mr Vorayuth’s failure to stop after the accident. The police officer’s body was dragged more than 100 meters along the road beneath Mr Vorayuth’s Ferrari.

Vicha Mahakhun, former member of the National Anti-Corruption Commission who heads the committee, announced its findings at Government House on Tuesday.

He said that it was unusual that the body of Pol Snr Sgt Maj Wichian Klanprasert had been dragged for more 100 meters beneath Mr Vorayuth’s Ferrari without it stopping after hitting his motorcycle.

“There was information and remarks indicating that the failure to stop the car at once, and the fact that the dead person was dragged that far, might be an indication of an intention to kill,” Mr Vicha said.

He said that later photos showing the Ferrari and the dead policeman’s motorcycle placed together clearly showed that the car crashed directly into the rear of the bike, not into the side of it.

Mr Vicha also pointed to many other irregularities in the handling of the case by police and the Office of the Attorney-General.

Policeman treated as a Suspect in Red Bull Heir Case

The dead policeman was treated as a suspect in the crash, being accused of abruptly changing lanes. That was an illegal and unfair charge to lay against the dead man. Because above all he had no chance to defend himself, Mr Vicha said.

Defining the dead victim as the wrongdoer “severely ruined the case and could result in a suspect being freed from charges or not”, he said. Mr Vicha also held interrogators at fault. Above all for failing to include a charge of drunk driving, even though the question was raised.

In addition, there was the failure to bring Mr Vorayuth to indictment as originally decided by prosecutors. Six months passed, giving the suspect the opportunity to file petitions, he said.

As many as 14 petitions were filed. The first 13 were rejected by a former attorney-general and several deputy attorneys-general.

He referred to the assumption that the Ferrari had not been speeding made by Pol Col Thanasit Taengchan of the Office of Police Forensic Science; and Saiprasit Kerdniyom, head of the Automotive Safety and Assessment Engineering Centre at King Mongkut’s Institute of Technology North Bangkok.

Mr Vicha said that Pol Col Thanasit had originally estimated the Ferrari was going at 177 kilometres per hour. He later reduced the figure to less than 80kph.

Mr Vicha said Pol Col Thanasit told his committee that he had been pressured.

His committee proposed to Prime Minister Prayut Chan-o-cha that the case be totally re-investigated and legal action be taken against officials responsible. High-level officials might not face criminal or disciplinary actions due to lack of evidence, but could be removed from their positions under the morality law, Mr Vicha said.

Mr Vicha also mentioned late witness Jaruchart Maadthong. He changed his testimony on the Ferrari’s speed from high to low. He said the witness had a connection with Mr Vorayuth. Police were also investigating why the witness’s  mobile phone was intentionally destroyed after his fatal crash in Chiang Mai.

Mr Vicha also proposed that the Department of Special Investigation take over the hit-and-run case. He said that about 10 government officials should face legal action over irregularities in the case.

Mr Vorayuth, now 35 and also known as Boss, drove the Ferrari that hit and killed Pol Snr Sgt Maj Wichian, 47, in the early morning of Sept 3, 2012. He crashed into the rear of the police motorcycle on Sukhumvit Road. Mr. Vorayuth then fled the scene to his home nearby.

He delayed hearing charges seven times. It was not until April 27, 2017, that prosecutors finally charged him with reckless driving causing death and failing to help a crash victim.

He fled on a private plane two days before he was due to face the hit and run charges.

A speeding charge was later dropped when the one-year statute of limitation expired. A second charge, failing to stop and help a crash victim, expired on Sept 3, 2017. He also had cocaine in his system but wasn’t charged.

The third and most serious charge, reckless driving causing death, would have remained on the books until 2027, but in June the charge had been dropped. Mr Vicha said re-investigation could cover any charge, the statute of limitation remained valid.

Mr Vorayuth is the son of Chalerm Yoovidhya, whose family co-owns the energy drink megabrand Red Bull. He ranks second on Thailand’s richest list, with a net worth estimated at US$20 billion.

Africans Arrested for Scamming US1.82 Million From German