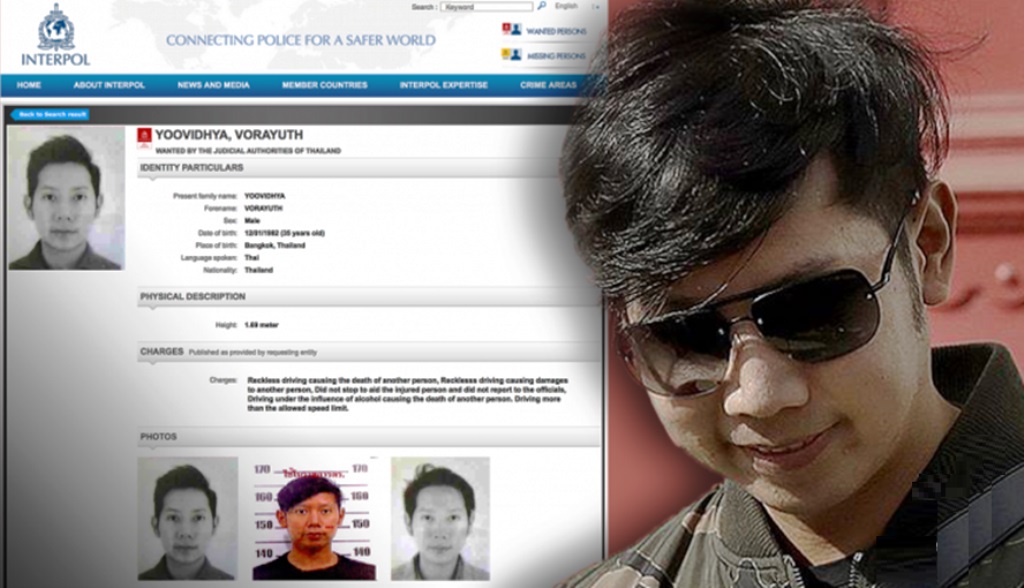 An Interpol red notice has been issued to all its member countries to track down Red Bull Heir Vorayuth “Boss” Yoovidhya. The Red Bull heir is wanted in Thailand for hit-and-run and drug use.

Interpol has notified the Foreign Affairs Division, Royal Thai Police, about the red alert, Asia One reported on Friday.

Mr Vorayuth, the heir to a billionaire family, hit the headlines in August after prosecutors dropped the last charge against him. Charges in the hit-and-run case that killed a policeman riding a bike eight years ago.

The source explained that an Interpol red notice means if Mr Vorayuth enters countries that are members of Interpol, they will alert the Royal Thai Police of his location.

Even more, the notice has no mandatory condition. The decision to notify Thai authorities depends on the country’s discretion.

Furthermore, the Thai government has notified Interpol that Mr. Vorayuth is holding a Thai passport. Which will prompt the member countries to check for Thai passport holders only. This means if he uses other passports, he can slip through the screening system.

“We [RTP] will do our best and we will not protect police who do wrong. We need to find evidence to substantiate the claims. The evidence will then be to the National Anti-Corruption Commission.

Thailand police have found more evidence against the 21 police officers named in addition to that uncovered by Mr Vicha’s fact-finding panel, they said. Further details were unavailable.

Investigators from police  indicted Mr Vorayuth Aug 31, on three charges: reckless driving causing death; failing to help a victim after a crash; and drug abuse. Eleven of the 21 police officers had been accused of negligence in their duties by the NACC in 2016. Most of the police officers have already faced disciplinary measures.

The remaining officers were recently found to be involved in the mishandling of the case and would be investigated by the NACC. Above all to find out if they had committed any criminal offences, said the assistant police chief.

Regarding assistant national police chief Pol Lt Gen Permpoon Chidchob who is also alleged to have been involved in the police’s mishandling of Mr Vorayuth’s case, Pol Lt Gen Jaruwat said the police had set up a panel to launch a disciplinary probe against him. Also, that did not mean he was found to be involved in mishandling the case.