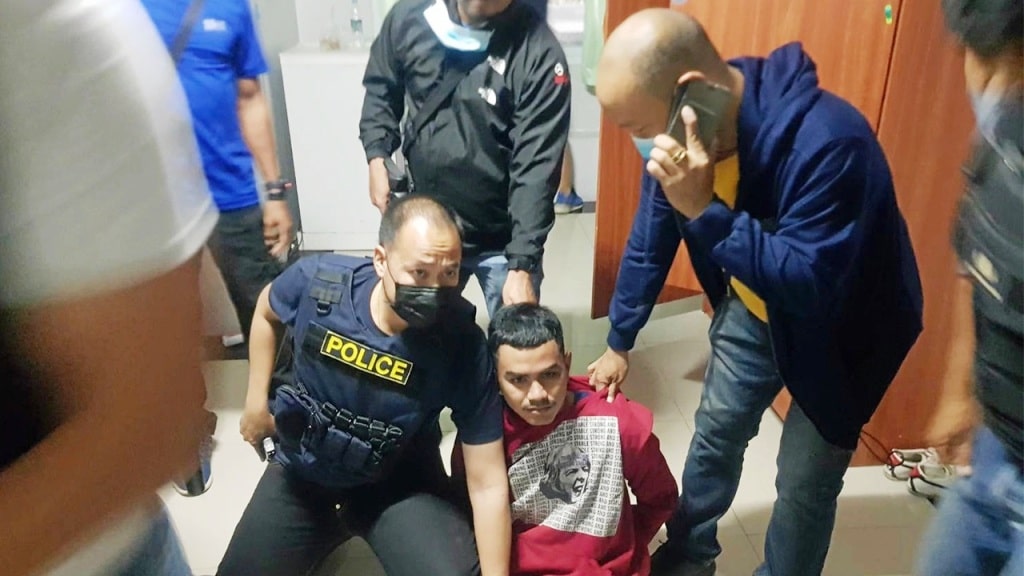 A gunman who allegedly shot and killed a senior police officer at a petrol station has been arrested at an apartment in Chon buri’s Sriracha district. He’s accused of Killing Police Sub-Lieutenant Charnwit Ditjaroen,53.

Police Sub-Lt Charnwit, was shot dead by a member of a group of young people comprising six men and three women, who were drinking at a PTT petrol station in Suphan Buri on Sunday night.

A witness said that Sub-Lt Charnwit, who was wearing civilian clothes, warned the group about turning the music on too loud. He also advised them to go home, when the gunman walked up to him from behind and shot him on the nape of the neck.

After the shooting, the suspect and their group fled the scene on motorcycles and a pickup truck.

Police reviewed the CCTV footage and identified the alleged shooter as Sitthiphong Jasa-ard, aged 23 years. A Police manhunt tracked him down to an apartment in Sriracha district in Chonburi province.

Police also reportedly found a 38 handgun, believed to have been used by the suspect.

Mr Sitthiphong was charged with first degree murder, possession of an unregistered firearm, and bringing a firearm to a public place without proper reason. He was brought to Suphan Buri Police Station for interrogation.

Meanwhile, Police called to the pavement in front of Government House on Monday found a distraught man threatening to slash his own throat with a utility knife.

The man, named as Praset Adam, 62, told police he had been cheated out of a large sum of money by a friend. Standing by a Government House entrance surrounded by police, guards and reporters, he held the knife to his throat and threatened take his own life unless the government helped pay off his debt of Bt800,000 (S$35,000).

He had also brought a financial contract with him, as evidence of his friend’s fraud.

After a tense stand-off, police managed to calm the man down and disarm him. He was then questioned about the reasons for his action.