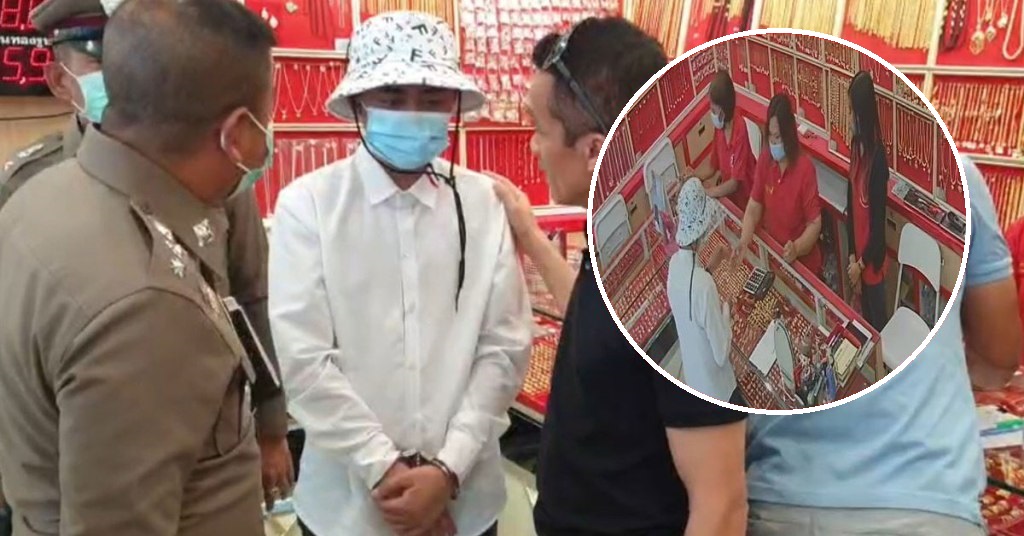 A gold thief in Bangkok who ran off with two necklaces from a gold shop has been arrested after dropping his ID card while escaping. Bangkok Police said the had no trouble finding his because he dropped his ID card as he fled.

Bangkok Police arrested Pathompong Suknane, 34, at his house nearby the gold shop with the two gold necklaces.

Pathompong, a food delivery driver, was charged with stealing the 2 baht-weight necklaces from the gold shop. The gold shop was located in the Phattanakan branch of Tesco Lotus store on Phattanakan Road around 11.10am on Thursday.

Employees told Bangkok police that a lone man, wearing a face mask, cap, white shirt and black trousers, entered the shop and expressed interest in buying a gold necklace, according to the Bangkok Post.

One staffer showed him two gold necklaces, each weighing 2 baht, asking which one he would like. The man asked the cost. As the employee was calculating the price, he grabbed both necklaces and ran from the store.

The thief fled on a motorcycle parked outside, evading security guards who tried to stop him.

Bangkok police called to the scene found an ID card on the ground and soon tracked the person named on it to his residence in Phattanakan area. They found Mr Pathompong, the two necklaces, and the motorcycle the thief used to make his escape.

The suspect told police he delivered food for a living, but he was not making enough money to make ends meet. So he decided to rob the gold shop, according to police.

He was charged and taken back to the gold shop for a re-enactment of the theft. Security camera footage of the thief fleeing from a gold shop will be used in court.