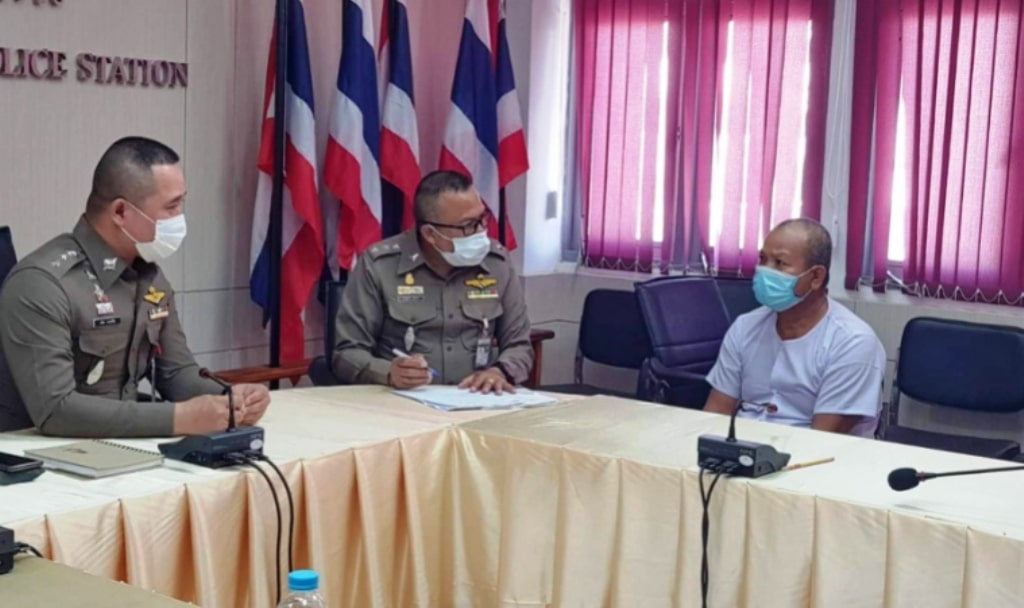 Police in Northeastern Thailand have arrested a fugitive killer monk wanted for allegedly murdering a fellow monk in a Khon Kaen rice field. The 53-year-old monk (Now Defrocked) was caught at a drink-drive checkpoint in Chaiyaphum on the way to a temple.

Kong-ngai Saenkaew, 53, was wanted on a warrant issued by the Khon Kaen provincial court on Feb 6, 2020. He was wanted  on charges of assault causing death, police said.

Mr Kong-ngai, formerly Phra Kong-ngai, was wearing a saffron robe when he was pulled over at a drink-driving checkpoint in Chaiyaphum province. A record check showed that he was wanted on an arrest warrant. Officers in the northeastern province handed over him to Khon Kaen police. He was defrocked before being arrested.

The case dates back to Jan 27 when a monk, identified later as Phra Winai, 50, or Luangta Lae of Pha Khao district in Loei, was found dead near a high-voltage power pole in a rice field in Muang district of Khon Kaen.

Police investigators found clues that indicated the killer was also a monk. The suspect, who had been staying under an umbrella in a thudong mission or pilgrimage in the same area, vanished after the body of Luangta Lae was found.

During the police interrogation, Mr Kong-ngai said he had been in the monkhood for a long time and got to know Phra Winai. They went on pilgrimage together and stayed under umbrellas in a rice field in Khon Kaen. During the pilgrimage, they got along well with each other, he told officers.

On the evening of Jan 26, they shared money to buy bottles of herbal energy drinks and liquor. However, a quarrel later erupted after Phra Winai allegedly said insulting things about the suspect’s father.

In a fit of frustration, the suspect said he punched Phra Winai, who later walked away to stay at another spot in the rice field, near a power pole. On the morning of Jan 27, Mr Kong-ngai said he came to patch up the rift with Phra Winai, but the latter was still drunk, claimed the suspect.

They quarreled again and this time he used a wooden baton to hit his colleague three times until Phra Winai fell down and collapsed. He then dragged the body to the base of the power pole, he said.

Pol Col Preecha said the suspect fled to stay with a relative in Phu Khieo district of Chaiyaphum after the crime. He later fled to other provinces and stayed in a forest in Trang on a pilgrimage for several months before leaving the monkhood.

The suspect then went to Suphan Buri to raise ducks at a relative’s house but he was not happy with his layman’s life. He later returned to the Northeast and entered the monkhood again. After being ordained, he went to stay at a temple in Chaiyaphum according to Thai Media.

On Friday suspect bought herbal energy drinks and liquor and was driving to the temple but encountered the checkpoint. He was asked to undergo an alcohol test but he refused. Officers then asked his name and checked his record, which was when they learned he was a wanted man.

The Khon Kaen police chief said the suspect confessed to the charge and was being held in custody at the police station for further legal action.