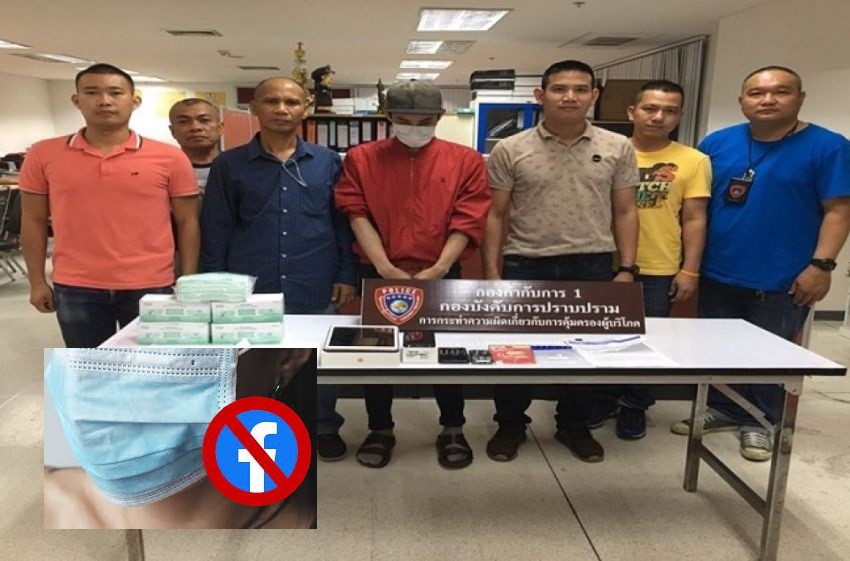 Pol Maj Gen Nathasak Chaonasai, said Watcharapong Yokat, 27, announce the sales of medical masks at a discount on Facebook marketplace but actually had no stock.

He duped 200 people hoping to buy face masks out of a million baht , the commander said.

The suspect had been charged with alleged embezzlement, Pol Maj Gen Nathasak said. He warned consumers to check the profiles of online vendors. And above all to see how long their Facebook Marketplace had been opened.

He added that his division has also seized about 53,000 face masks from vendors who violated the law. Furthermore he would send the seized products to need parties.

The vendors who overpriced face masks are liable to a jail term of up to five years and/or a fine of up to 100,000 baht, the commander said.

A Chinese man in Pattaya claims he was duped into buying substandard face masks for almost two million baht.

Mr. Artor Sae Wang, from China told the Bangkok Post that another Chinese man introduced him via Facebook Marketplace. The agent showed him samples of face masks, which were standard, said Mr Artor.

He then asked to inspect all the merchandise before paying the money, but the agent refused. The man then asked him to transfer 1,075,000 baht to a bank account of a man identified as Ronnarit. And also another 700,000 baht to Jinju Co’ s bank account. He also paid 100,000 baht to other Chinese man for brokerage fees.

After the money was transferred he was taken to collect the boxes of face masks from a pickup truck. On arrival, he found that the face masks were substandard and contaminated with fungi.

He immediately asked for his money back, but the agent refused. The agent then challenged him to file a report at the police station. The man also runs a rented room service in Pattaya.

He filed a complaint with Don Muang police station on Feb 7th and so far, there has been no progress in the case. The Chinese man claims the face masks are now emitting bad smells.

Businessman Gunned Down in Front of Children in Southern Thailand