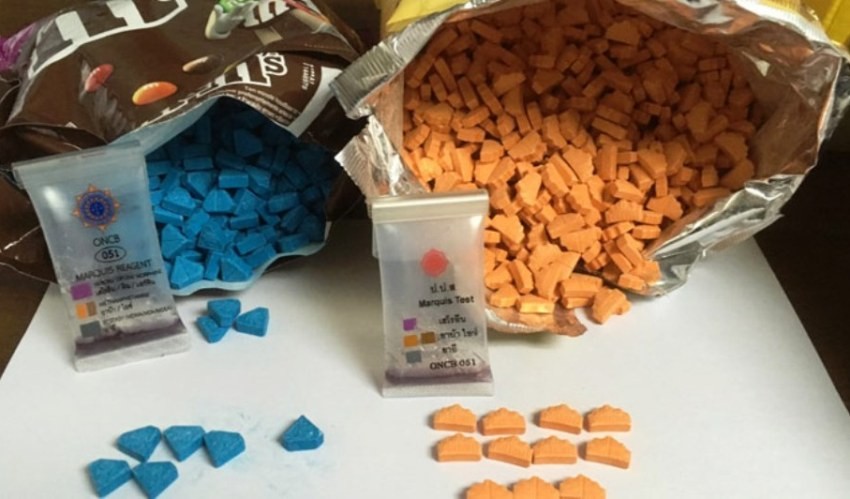 Thailand’s Narcotics Control Board (ONCB) has reported the seizure of over 26,000 ecstasy pills in the month of February 2020. The ONCB, Thai Customs, Narcotics Suppression Bureau (NSB), work to stop the inflow of the illegal drugs.

The ecstasy pills were discovered through the Airport Interdiction Taskforce (AITF). An investigation discovered that there was a shipment coming in from Germany via international post. Officials found 3 boxes with a total of 26,340 ecstasy pills. The boxes were traced and officials made 3 arrests of Thai and foreigners.

All together officials seized a total of 100,257 ecstasy pills from the European shipments.

Niyom Termsrisuk from the Office of the Narcotics Control Board said that ecstasy works similarly to Yaba and crystal meth. Ecstasy also a category 1 Narcotic under the Narcotic Act B.E. 2522. Commonly referred to as hard drugs.

Smuggling ecstasy pills into the Thailand is also punishable by death. Selling or distribution of the ecstasy pills can bring you life imprisonment and a fine of Bt5 Million.

Mr. Niyom also warned users that ecstasy is dangerous and can cause extreme hallucinations. An overdose can also affect your heart and lead to death.

Ecstasy is also commonly referred to as MDMA and Molly, the Thairesidents reports. Its a synthetic drug that when taken alters your mood and your overall perception. Chemically it gives users a feeling of ecstasy, thus the source of its name. Ecstasy brings users a high level of energy, and enhanced feeling of love and warmth. Ecstasy is commonly used by ravers and nightlife addicts.