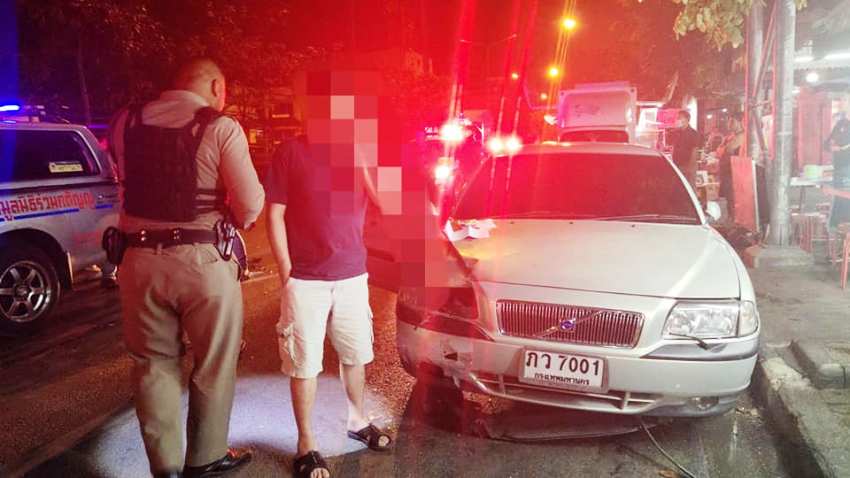 A 48 year-old university professor has been arrested after crashing into a police motorcycle while under the influence of alcohol. Two police officers and an elderly woman were injured in the accident.

Police and rescue team from the Ruamkatanyu foundation were called to an accident scene at Suksawat road near Suksawat 47 and discovered a police motorbike lying on the road and 2 injured officers.

The first injured officer was Pol. Senior Sergeant Major Kiatisak Kongpetchsak the driver of the police bike. The other was Pol. Lance Corporal Satapat Singhayotha. Both are stationed at Phra Pradaeng in Samut Prakan Province.

The injured civilian was a 70 years old the owner of food stand by the road. She said was working as usual when the car drove into her.

Pol. Lance Corporal Satapat said that the car drove directly into their police bike from behind. The motorbike flew 20 meters away while the two fell onto the road.

Police officials asked the University Prof. to come out of his car but he seemed to be drunk and won’t leave the car. Finally, he came out and officers took pictures of the accident. Along with checking the security footage before moving his car to the station.

Police invited him to the Police Station but the Professor insisted on waiting for his sister. Officials also asked the professor to take a breathalyzer he refused. He then tried to drive away using his sister’s car.

A officer tried to stop him because he was still drunk a heated argument started between the sister and the police.

The professors sister stood between her brother and the police while people started to come to watch.

Police reported the professor alcohol level was at 161 mg/dL, well above the legal limit. He was charged with drunk driving that caused injury to 3 persons and other damages.

The professors sister also filed a report saying that the police officers abused her during her brothers arrest.