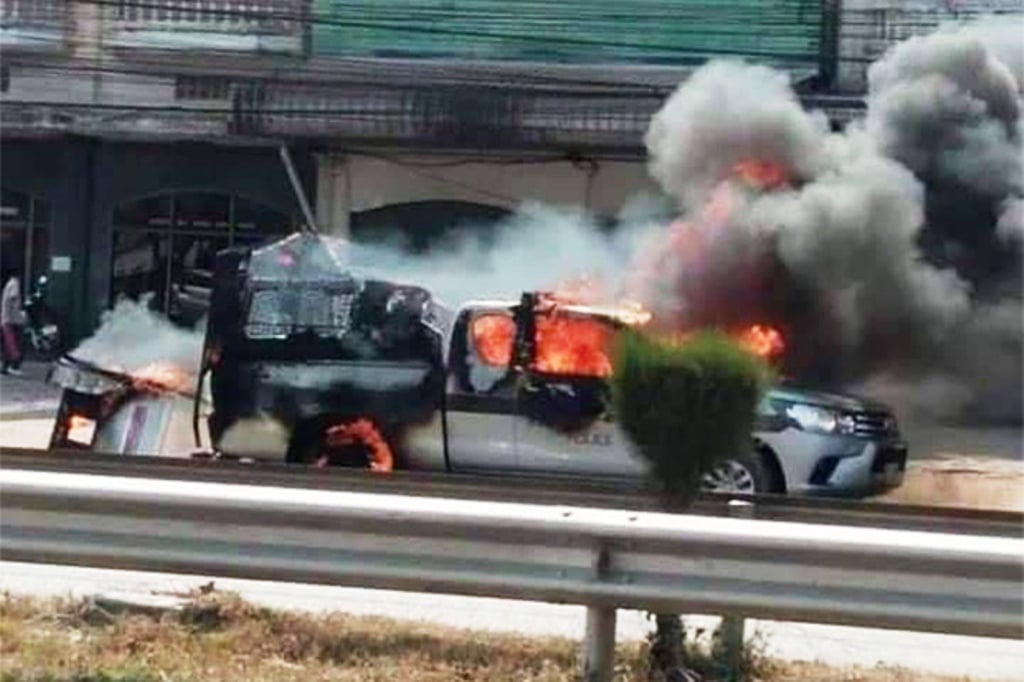 A drug suspect tried to escape detention on Friday by torching a police truck carrying him and three other suspects to the provincial court in northeastern Thailand’s Udon Thani province.

The fire broke out in the police truck as it was heading to the court where officers were seeking to further detain the four suspects.

A police truck driver spotted the fire behind the passenger compartment and stopped to douse it. He unlocked the rear door to bring the four occupants, incuding Somsamai Paipanao, 46, to safety.

Mr Somsamai then escaped, while the others stood still. Police soon found him hiding in a drainage pipe about 100 metres from the scene.

The suspect was facing charges of possessing 68 meth pills and 3.37 grams of crystal meth. Now he faces a charge of damaging state property, laid by local police.

The police officers believe he used a lighter or matches to set the fire. Police internal affairs are investigating why he was not searched before being put in the vehicle.

Meanwhile, Police have arrested two members of the ‘Free Guard’ pro-democracy group in connection with a bomb which was thrown at an anti-government rally in Bangkok on January 17th last.

The two were named by police at Pathumwan Police Station as 23-year-old Pornchai Prakaphuang and 19-year-old Natthasut Siri-ut.

The two detained were among three named in arrest warrants sought and obtained from the Bangkok Criminal Court by police on Wednesday. Police are understood to be tracking down a third person identified in connection with the incident.

Officers with the Metropolitan Police Bureau, following an intensive investigation, reported that the device used was a ping pong bomb the size of a table tennis ball.

It was thrown into an area near where two police officers were stationed and where a reporter with The Standard news website was reporting on the day’s events.

The device caused shrapnel to fly which hit the police officer on the hand and the reporter in the calf of the leg. A civilian was also hit and injured by the device. No one sustained serious or life-threatening injuries. However such devices, in the past, have proved deadly in Thailand