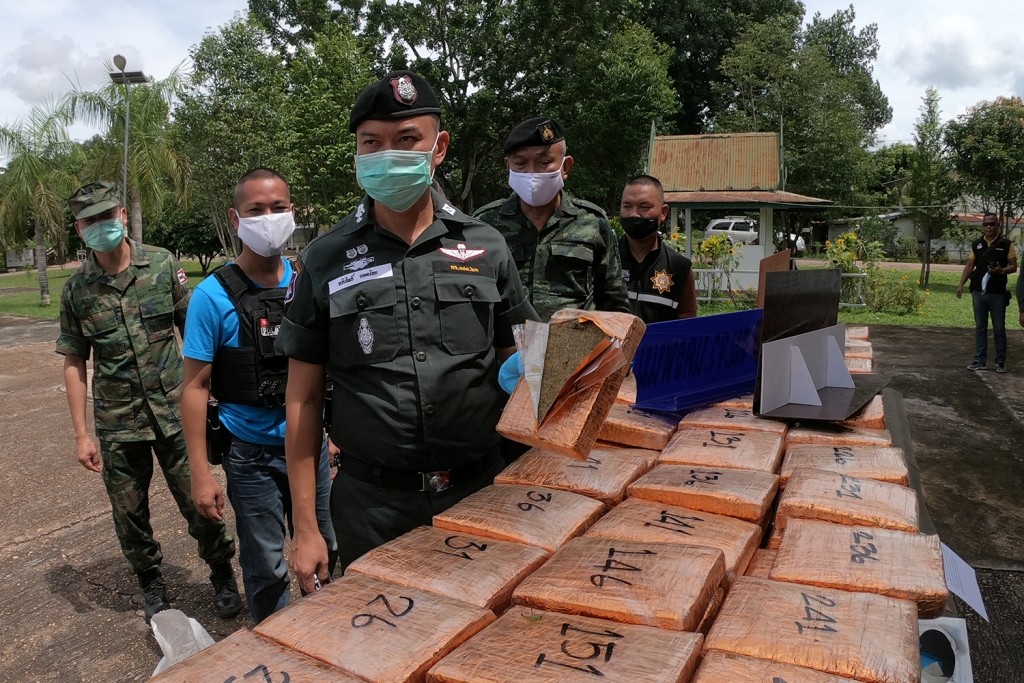 Eight black plastic bags were found by border police near Hat Sai Phe village in tambon Nong Thao. The bags contained 270 bars of dried marijuana, each weighing 1kg. Border police believe bricks of marijuana had been smuggled across the Mekong river. Police said smugglers used high speed long-tail boats to transport the marijuana to the Thai side of the border.

Consequently no smugglers were found at the scene when the border police arrived. Furthermore police believe the dried marijuana was dropped for further distribution into Thailand.

Nearly two tonnes of marijuana has been seized in this border province during the past month, Police said. The seized items were displayed at BPP Company 237 headquarters in Tha Uthen district for media viewing.

Meanwhile, Thailand has sought help from Laos to step up efforts against drug trafficking along the Thai-Lao border. This comes after smugglers changed their routes from the North to Northeast due to heavy suppression along the northern boundary with Myanmar.

Secretary-General of the Office of the Narcotics Control Board (ONCB) Niyom Termsrisuk said the border police and its Lao counterpart are collaborating to prevent drug trafficking through the northeastern borders into Thailand.

The Royal Thai Armed Forces have formed a working group responsible for combating drug trafficking in Thai provinces bordering Laos. Twelve teams of officers have been set up to coordinate drug investigation and suppression operations.

Anti-drug operations in Thai provinces would align with those in Lao provinces, Mr Niyom told the Bangkok Post.

Thailand is keeping a closer watch on the Thai-Lao border zones. Above all due to drug traffickers’ change of smuggling routes. This comes after the Myanmar government began continuously and vigorously cracking down on drug production and storage sites its country.

The ONCB chief also revealed that more drug smuggling was recently detected along the northeastern borders from Loei to Ubon Ratchathani provinces. Nong Khai, Mukdahan, Bung Kan and Nakhon Phanom are the provinces through which drugs have been smuggled the most.