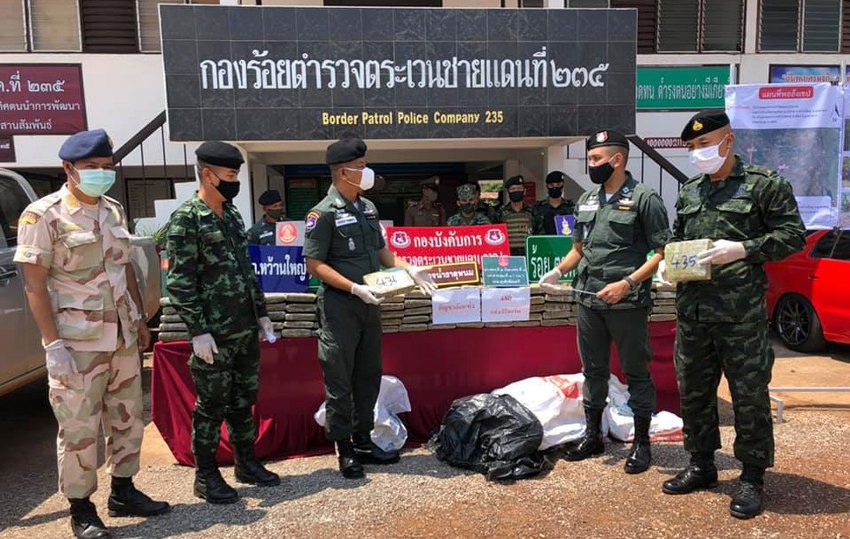 Border patrol police have seized 480kg of compressed marijuana on the bank of the Mekong River in northeastern Thailand. Narcotics suppression police estimate the street value of the marijuana at least 10 million baht.

A village head and two other accomplices have been arrested Pol Col Sippanan Sornkhunkaew, commander of the Border Patrol Police told media briefing on Saturday.

The men were taking the marijuana via the Mekong River to a storage place when officers spotted them. The village headman Mr Phuthorn claimed this was the first time he had been involved in the drug trade, however authorities were not convinced.

The arrest followed an investigation that the suspects had been close to a drug trafficking network. The gang had bought marijuana from Laos then transported it across the Mekong River. The gang then kept the marijuana in  storage before distributing it further down country.  Authorities are expanding the investigation, the Bangkok Post reported.

The 12 men were arrested in various raids throughout Bangkok, Pathum Thani and Ayutthaya.

The marijuana had been advertised on a Line Chat group called “Heaven Herb.’ Which had about 6,000 members, Polce said. It was set up by ID Line user @heavenherb.

In the first raid police arrested a man identified only as Bank, 27, and eight associates. They also seized 3 kilograms of dried marijuana and 1kg of magic mushrooms, at a car care shop in Bangkok.

In the second operation, Diew, 24, was apprehended with 1.5kg of dried marijuana in Pathum Thani province.

During interrogation, Diew allegedly said he had purchased marijuana from a Chinese national. This led to the arrest of Mr. Yinma and the seizure of 317 marijuana plants. The marijuana plants were found on the second and also the third floor of a commercial building.

Yinma told police he had grown the plants inside the building and dried them for sale.

He could produce 10kg of marijuana a month. His customers were Thais and foreigners, with deliveries to 30-40 customers a day. He had sold marijuana to 5,000-6,000 customers before being caught.