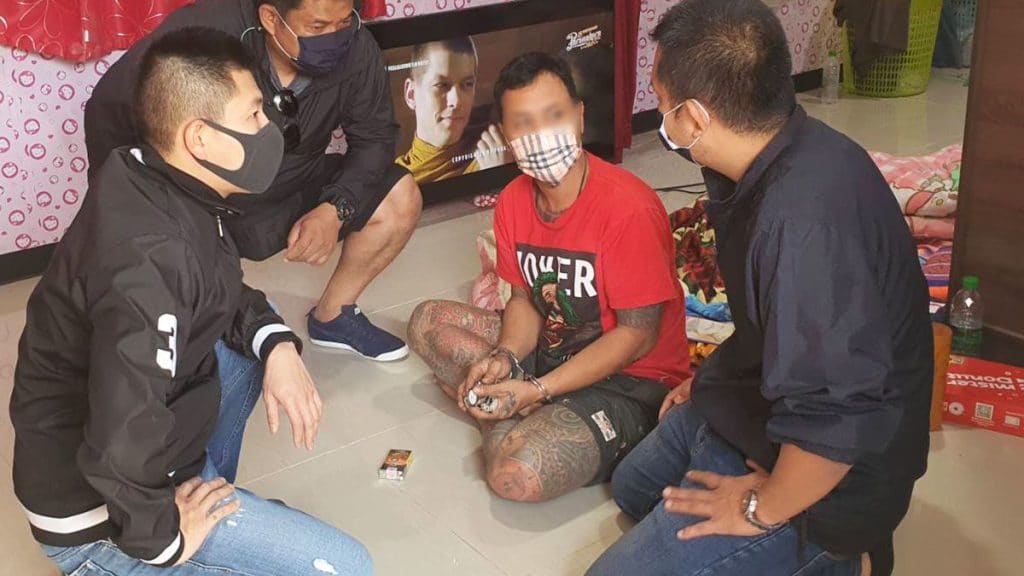 Police reported he was arrested in Phetchabun after he fled a police hunt in Bangkok, where many drug users have died after taking the deadly cocktail.

Investigators were confident the 33-year-old man was a mastermind in the mixing of the illicit drug cocktail. The cocktail is reported to contain ketamine, methamphetamine, heroin and pure diazepam.

Pol Lt Gen Pakkapong said Mr Amornthep denied being behind the drug, admitting was only a distributor, from supplier to customers. Mr Amornthep  fingered Kulnathee Iemloy as his contact in delivering the deadly power to buyers.

He said Mr Amornthep also faces a charge of attempted murder, after his girlfriend, Apisa Hongkhan, was shot at an apartment in Bangkok on the night of Jan 10. She was severely wounded. Police said he admitted to shooting her.

The motive for the shooting could have been Mr Amornthep’s suspicion that his girlfriend had stolen powdered milk ketamine and sold it buyers without his knowledge.

The suspect was being held at Phahon Yothin police station for the attempted murder and on other charges relating to illegal arms possession. He was being interrogated about making the drug cocktail, dubbed k-nom pong by Thai users because it resembles powdered milk.

Phahon Yothin police chief Pol Col Prasobpchok Iempinit said on Monday that investigators were still compiling their case, to back up their belief he was producing the drug cocktail. Police also seized small plastic bags and a scale during the raid in Phetchabun.

Mr Amornthep is also on the wanted list of Phraya Krai police, after they found Panipak Chantharawarawan, 22, dead and his boyfriend, Thachchai Klomjai, unconscious after taking k-powered milk on Jan 9.

When he regained consciousness on Jan 10, Mr Thachchai told police that he had bought  the drug from Mr Amornthp and Ms Kulnathee, who has already been arrested.

Police said Mr Amornthep had served a term in prison from 2005-207, but did not give details.

Police are seeking warrants for the arrest of four people in Lat Phrao district suspected of also being involved in the distribution of the deadly drug cocktail in Bangkok, where it has been linked to at least 10 deaths.